THE 27% decline in crude oil price from its one-year high of US$115.06 per barrel on June 19 to the current level of around US$80 and the lacklustre global economic conditions are weighing on petrochemical products.

Nevertheless, some analysts are calling a “buy” on Petronas Chemicals Group Bhd (PetChem). Its share price has fallen 11.6% over the last one year to RM6.11 last Wednesday.

“Petrochemicals are cyclical products, and their prices depend on supply and demand factors, besides crude oil prices. PetChem’s management is guiding for the prices of petrochemicals to increase going forward,” says an analyst with a local independent research house.

“At the current valuation of between 12 and 13 times estimated FY2015 earnings per share, PetChem is an attractive stock to buy into. It also has some of the best profit margins in the industry,” the analyst adds.

According to Bloomberg, PetChem has an average price-earnings ratio of 16 times.

According to Platts data released on Oct 16, Asian petrochemical prices have dropped sharply amid tumbling crude oil values due to concerns about global growth and demand, with aromatics such as paraxylene dropping to a four-year low.

Paraxylene, an aromatic hydrocarbon derivative used for making plastic bottles and polystyrene products, contributed 13% to PetChem’s annual revenue for FY2014 ending Dec 31, as estimated by JP Morgan in a recent report. Paraxylene is included in olefins and derivatives products, which contributed about 70% to PetChem’s RM7.2 billion revenue for the six months ended June 30, 2014 (1HFY2014).

Asian paraxylene prices have been falling since late September due to the emergence of new start-ups in the region, according to Platts. Besides that, weak feedstock naphtha prices will also drive down paraxylene prices, added the global provider of energy, petrochemicals, metals and agriculture information.

Producers are ramping up supply of paraxylene to take advantage of the low feedstock price, despite the still-sluggish demand for the product, says an industry source. Weak demand for polystyrene, a downstream product of paraxylene, also suppressed prices.

Naphtha, a type of hydrocarbon primarily used as a feedstock to produce petrochemicals such as gasoline, bitumen and other olefins, was trading at US$81.09 per metric ton in October in Singapore, compared with US$106.84 last December.

Methanol is estimated to contribute 16% to PetChem’s revenue in FY2014 ending Dec 31, according to JP Morgan’s estimate. Fertilisers, consisting of urea and ammonia, and methanol will contribute about 30% to PetChem’s annual revenue.

Based on Bloomberg data, PetChem has higher earnings before interest, tax, depreciation and amortisation (Ebitda) margins compared with its peers. For FY2013, the company registered Ebitda margin of 33% compared with PTT Global Chemical PCL’s 9.93% for its FY2013 ended December and Sumitomo Chemical Co Ltd’s 9.65% for its FY2014 ended March.

It is believed PetChem’s advantage over its peers is partly attributable to its parent, national oil company Petroliam Nasional Bhd.

While concurring that PetChem’s valuation is attractive at the moment, an analyst with TA Research says it is still not the time for investors to buy the stock. Investors should gauge its performance because of the execution issues at the company, she says. “Based on its track record, PetChem has not been able to execute well operationally. This can be seen in a number of plant shutdowns, some of which are not statutory at all in nature, as well as the gas supply issue.”

The utilisation rate at its olefins and derivatives plants fell to about 65% in 2QFY2014. However, utilisation at it fertilizers and methanol plants increased to 85% in 2QFY2014 from 67% in the previous quarter as the group had resolved its gas supply issue.

Last Thursday, PetChem reported declines of 9.7% and 27.2% in revenue and net profit to RM10.7 billion and RM1.96 billion respectively for the nine months ended Sept 30, due to lower volumes and prices.

According to Kenanga Research and RHB Research Institute, PetChem will do better in 2HFY2014 as the group has almost finalised its statutory plant turnaround, which started in the third quarter of last year.

Kenanga Research’s Teh Kian Yong said in his research report dated Aug 12 that PetChem’s earnings is expected to recover from the second half, due to the end of the statutory plant turnarounds as well as improving product prices.

Nevertheless, the cyclical nature of the petrochemicals industry causes PetChem’s share price to trade accordingly. There is also a lack of short-term catalyst for PetChem, says the TA Research analyst. The first capacity expansion through the Sabah Ammonia and Urea (SAMUR) plant will only be completed in 2016, as will the joint venture with BASF for the aromatic plant in Gebeng.

While Petronas has kick-started job awards for the Refinery and Petrochemical Integrated Development (RAPID) project in Pengerang, Johor, most of the contracts are for civil construction, earthwork and engineering, procurement, construction and commissioning (EPCC).

It is expected that PetChem will announce its own investment in the RAPID project. However, the impact on the group’s revenue and Ebitda will only materialise once the plant is fully operational, that is by 2019, according to analysts.

The uncertainty over the direction of crude oil price has caused many investors to stay on the sidelines. Some remisiers say they would only consider PetChem if it falls below RM6.

Nevertheless, it seems the market has started to appreciate PetChem, as its share price has started to move up from its lowest one-year close of RM5.93 on Oct 21. 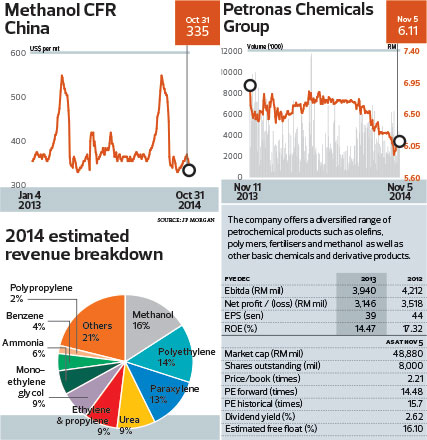