Mitraland to launch The Upperville 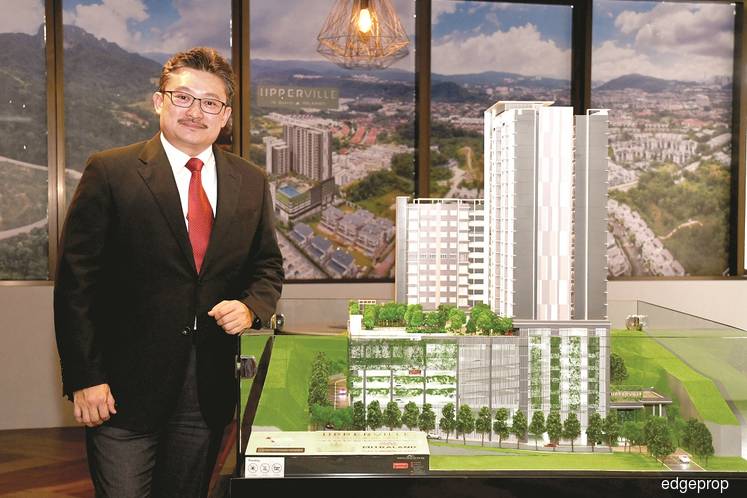 KUALA LUMPUR: A new condominium project by Mitraland Group is expected to be launched by early March. Called The [email protected] Quartz Melawati, the 24-storey project is located at Taman Melawati, Selangor.

Ng told EdgeProp.my that the condominium will be on a 2.7-acre leasehold site situated next to the developer’s award winning 16 Quartz development and surrounded by guarded-and-gated developments.

“The project actually offers one of the highest views in the Melawati area as many other developments in the surrounding area are low-rise ones. As there are only 176 units, it is a low density development within an exclusive neighbourhood with mature city amenities.

“Our target market is mainly owner occupiers especially empty nesters and upgraders, urbanites looking for city lifestyle living but close to nature, as well as professionals working in the city,” said Ng, adding that the units are all three-bedroom units. Maintenance fee of the development is estimated to be 30 sen to 35 sen psf.

Among the facilities at The Upperville is a swimming pool, gymnasium, games room, and lounge area while nearby public amenities include the Melawati Mall and education institutions such as Fairview International School and the Tunku Abdul Rahman University College.

“We have opened the project for registration of interest and to date it has been oversubscribed by two times the number of units and counting,” Ng said.

Upperville is accessible via highways such as the Duke Highway and the Middle Ring Road 2 and is targeted for completion by 2022.

Meanwhile, the group will also be previewing the fourth and final residential tower at its flagship development Gravit8 in Klang, soon.

Dubbed Ashino, the project comprises only 280 units with 2+1, 3 and 4-bedroom layouts to cater for young to growing families with sizes ranging from 871 to 1,237 sq ft.

“Buyers will be spoilt by the array of facilities at the podium of the four-tower residential block and the pet-friendly 8-acre Lakepark. Also in the pipeline is Phase 2C which will comprise 2 towers of lake-fronting serviced apartment units and retail spaces. Plans are underway to launch the first tower by end-2019,” Ng added.

He noted that Mitraland believes in cherry-picking prime locations for future developments as adding huge landbank costs to the mix would limit its flexibility and cash flow.

“That being said, in Klang, we still have six acres of land for future development which carries a GDV of RM600 million and another 20 acres in Puchong where we have plans for a lakeside development with an estimated GDV of RM450 million. Our landbank is not large but the GDV is estimated to be above RM1.5 billion which will last the group three to four years.”

“With the country experiencing political stability and a new government that encourages young buyers, consumer confidence will grow organically. Property ownership will always be part of every Malaysian’s priority as it not only provides shelter and comfort but also future security.

“There is no better time than now to purchase a property before the economy booms in the coming years,” he said.

This story first appeared in the EdgeProp.my pullout on Jan 25, 2019. You can access back issues here. — EdgeProp.my