Miti to focus on automotive parts and component exports in 2019 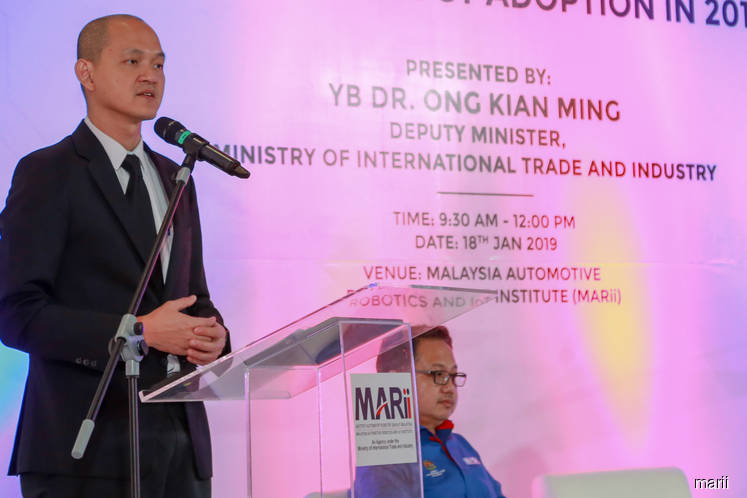 KUALA LUMPUR (Jan 18): The Ministry of Trade and Industry (Miti) will be focusing on initiatives to boost exports of automotive parts and components in 2019, targeting export value of RM13.03 billion for the year, up 7.7% from RM12.1 billion registered in 2018.

Hence, Ong said Miti's agency, the Malaysia, Automotive, Robotics, and IoT Institute (MARii), has come up with a string of programmes to tie up Malaysian suppliers with purchasers from overseas.

"For example, we will bring Perodua vendors to go meet Daihatsu in Japan so that there is potential to be explored in terms of exporting — not just to sell to Perodua, but also sell to the mother company," Ong clarified.

When the issue of the looming trade war was raised, Ong stressed that Miti's focus on automotive exports is precisely to address the issue and ensure that there will not be a slowdown in Malaysian exports.

"The fact that there is this trade tension shows an even greater importance for us to push exports in areas that require special attention. This situation makes all the more importance for Miti and our agencies to be focused on growing this market segment," he said.

Besides that, Ong also announced that the ministry is coming up with a new policy on remanufacturing later this year. He explained that remanufacturing refers to the process of restoring existing parts or components to 'as good as new' condition using a standardized industrial process in line with specific technical specifications.

"This is one of the areas that we identified as a potential area of growth because there is a lot of demand, not just in Malaysia, but also in the region to remanufacture automotive components in cars, trucks, and lorries.

"And we do have some domestic capabilities in Malaysia. This is an area where we want to explore further so that we can not only build the base here but we want to be able to say that this is an area that can be helpful in terms of helping Malaysia's trade surplus," he added.

During the briefing, it was revealed that Malaysia's automotive parts and component exports hit historic highs of RM12.1 billion in 2018. Meanwhile, the nation's vehicle exports rebounded from its decline in 2017, to breaching the RM2 billion mark for the first time at RM2.08 billion.

Remanufactured parts and components also recorded an increase to RM523.1 million, a steady increase year-on-year since MARii started reporting the sector's performance in 2016. MARii estimated this segment to further increase by 33.8% to RM700 million in 2019.

Some key components that Malaysia is exporting include components related to chassis, suspension, and rubber as well as plastic or resin-related. Meanwhile, key countries of exports include Asean countries, China, the Middle East as well as to the US.

MARii chief executive officer Datuk Madani Sahari pointed out that one of the main factors contributing to the major improvement in automotive exports last year was the fact that the exports of vehicles in 2018 were mainly expensive cars, such as Mazda, Volvo and Subaru.

“This shows that the level of production and manufacturing in Malaysia is of high level – being able to assemble cars that are of mid-to-high brands and luxury cars. At the same time, these car manufacturers also bought  local components from our local suppliers. So it is a good indication of how malaysian automotive industry is transforming to become a high value added production hub,” he said.