MHB back in the red but analysts upbeat about prospects 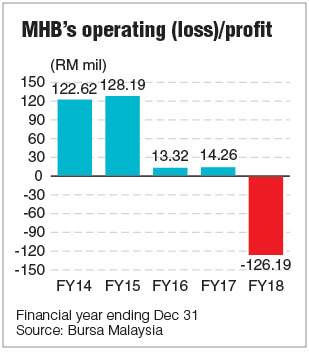 KUALA LUMPUR: Malaysia Marine and Heavy Engineering Holdings Bhd (MHB) posted a net loss of RM25.22 million, or 1.6 sen per share, in the fourth quarter ended Dec 31, 2018 (4QFY18), against a net profit of RM48.13 million or three sen per share last year no thanks to its operating loss from its marine segment.

This is the fourth consecutive quarter loss for the oil & gas (O&G) fabricator.

Its marine segment recorded an operating loss of RM33 million, against RM12.1 million profit in the corresponding quarter, mainly due to insufficient dry docking work to absorb fixed overheads and compressed margins for dry docking activities in the current quarter, MHB explained.

Its heavy engineering segment registered a higher operating loss of RM39 million, from RM36.7 million loss in the prior year, due to the closeout of completed projects in the previous year.

Still, analysts contacted by The Edge Financial Daily are optimistic about the company’s business operations. Indeed, the stock rebounded from its all-time low of 49 sen in December last year to 66 sen yesterday.

“In terms of operations, sentiment has improved. Business activities are on the rise. We are seeing an increase in order flows, both locally and abroad,” said Maybank Investment Bank Research analyst Liaw Thong Jung.

Liaw noted that MHB is Petroliam Nasional Bhd (Petronas)-qualified under the frame agreement to bid or build the fixed offshore structures, whereby based on Petronas Activity Outlook for 2019, there will be one light structure (less than 1,000 tonnes), four to five medium structures (1,000 to 7,500 tonnes) and one to two super heavy structures (more than 15,000 tonnes).

He highlighted that the multi-billion ringgit centralised processing platform (CPP) Kasawari (more than 7,500 tonnes) which is touted to be awarded this year, which MHB is seen to be in the lead, presents a better outlook for MHB.

Embarking to grow its presence outside Malaysia, Liaw noted the recent signing of the Long-Term Offshore Agreement with Saudi Aramco as a significant breakthrough to advancing its regional aspiration, while moderating its heavy reliance on domestic exposure.

While the agreement validates its technical capabilities, Liaw emphasised that this single-handedly offers MHB an exposure to a constant US$3 billion per annum tenders opportunity.

Concurring with Liaw, MIDF Research analyst Noor Athila Mohd Razak noted on another catalyst which is the completion of its Dry Dock Three in 2Q20 under its Marine segment.

Noor Athila opined that a turnaround is possible albeit in a gradual manner due to its ongoing Bokor Central Processing Platform project’s progress increasing throughout the year where higher revenue and earnings will be recognised at the later stage of the development; as well as if the marine segment stages a break-even in FY19.

“We think [that the breakeven for the marine segment] is possible due to the expected increase in dry docking activities as a result of the impending implementation of fuel Sulphur cap policy required by the International Maritime Organisation which is expected to be in force starting from January 2020,” said Noor Athila.

Looking forward, MHB said the group remains prudent on the outlook for the industry in the near term given the uncertainties surrounding timing of capital spending by major O&G players.

Despite the gradual improvement as oil prices have begun to ease at between US$50 and US$70 per barrel, a range of factors have continued to influence oil prices including production cuts by Opec, growth in US shale oil production and growing political tension across the globe, said MHB.

“The outlook for [the] marine business remains positive as global liquefied natural gas trade is expected to expand firmly driven by increase of exports from the US and Australia to Asia,” said MHB.