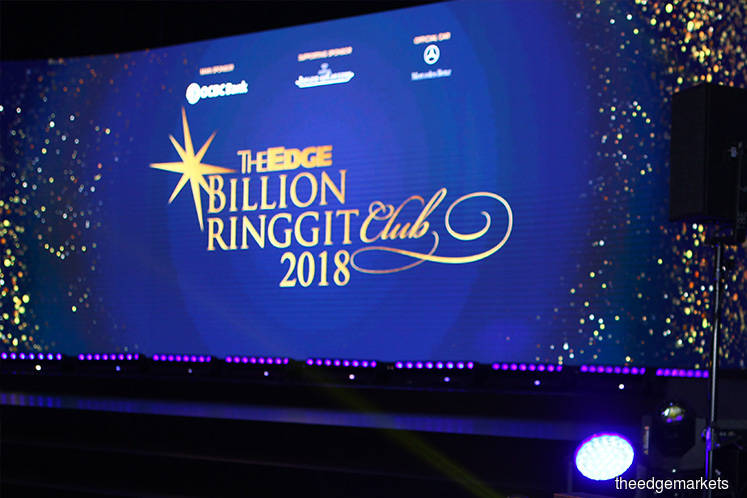 Membership of this elite group is automatic and complimentary for all companies listed on Bursa Malaysia as at March 31, 2018, with at least RM1 billion in market capitalisation. There are 170 members in the club this year.

As recognition is the best reward for accomplishments, it is The Edge’s hope that the awards continue to encourage more companies to strive even harder for excellence.

The sectoral awards are:

To be eligible for the corporate awards, a BRC member must have been listed at least four calendar years before the end-March cut-off date in the current year, as companies are evaluated on their financial performance over three years.

The methodology for the corporate awards is both stringent and transparent, with the results audited by Deloitte Malaysia. The data used to determine the companies that qualify for The Edge BRC membership and winners of The Edge BRC Corporate Awards is provided by Asia Analytica Data Sdn Bhd as well as extracted from Bloomberg.

Winners for The Edge BRC Highest Returns to Shareholders award are judged purely based on total return, consisting of share price gains and dividends over a three-year period. The cut-off date this year was June 30.

The annual end-March cut-off date for BRC membership was unchanged due to the need to source CR information for the judges’ consideration.

Companies with scores within 0.5 point of each other are deemed to be of the same rank in determining the winner. There could, therefore, be cases of joint winners for the awards.

THE EDGE BRC COMPANY OF THE YEAR AWARD

The Edge BRC Company of the Year award recognises the year’s best company based on the following factors:

Returns to shareholders over three years    20%

Growth in profit after tax over three years    30%

The final decision on The Edge BRC Company of the Year takes into account other qualitative elements as determined by The Edge.

The winner(s) of this award is determined by The Edge based on an assessment of the person’s contribution to value creation for his/her company. Here, value creation is reflected in the company’s market valuation, return to shareholders and stakeholders, revenue and profit growth as well as employment creation. To be chosen, the CEO must have achieved outstanding success in all these areas. Assessment starts from when the person became CEO of the company. The Edge has absolute discretion in deciding on this exclusive award and can choose not to name a winner — as was the case in 2011 and 2015.

In 2010, the award went to Tan Sri Teh Hong Piow and Datuk Seri Nazir Razak for their outstanding contribution to their respective banking groups, Public Bank Bhd and CIMB Group Holdings Bhd.

In 2012, the recipients were AmBank Group founder and chairman Tan Sri Azman Hashim and AirAsia Bhd co-founder and group CEO Tan Sri Tony Fernandes. Azman remains a financier for all seasons, while Fernandes won for his role in transforming Asia’s aviation industry.

In 2013, the award went to Tan Sri Abdul Wahid Omar and Tan Sri Liew Kee Sin, former president and CEO of S P Setia Bhd. Abdul Wahid was recognised for his leadership during his tenure as CEO of Renong Bhd (2001 to 2004), Telekom Malaysia Bhd (2004 to 2008) and Malayan Banking Bhd (2008 to 2013), while Liew won for his contribution at S P Setia, a company he left in April 2015 (after about 18 years) for niche developer Eco World Development Holdings Bhd.

In 2015, the award went to Khazanah Nasional Bhd managing director Tan Sri Azman Mokhtar, who was instrumental in not only transforming the institution but also the collective transformation of 20 government-linked companies across varied industries.