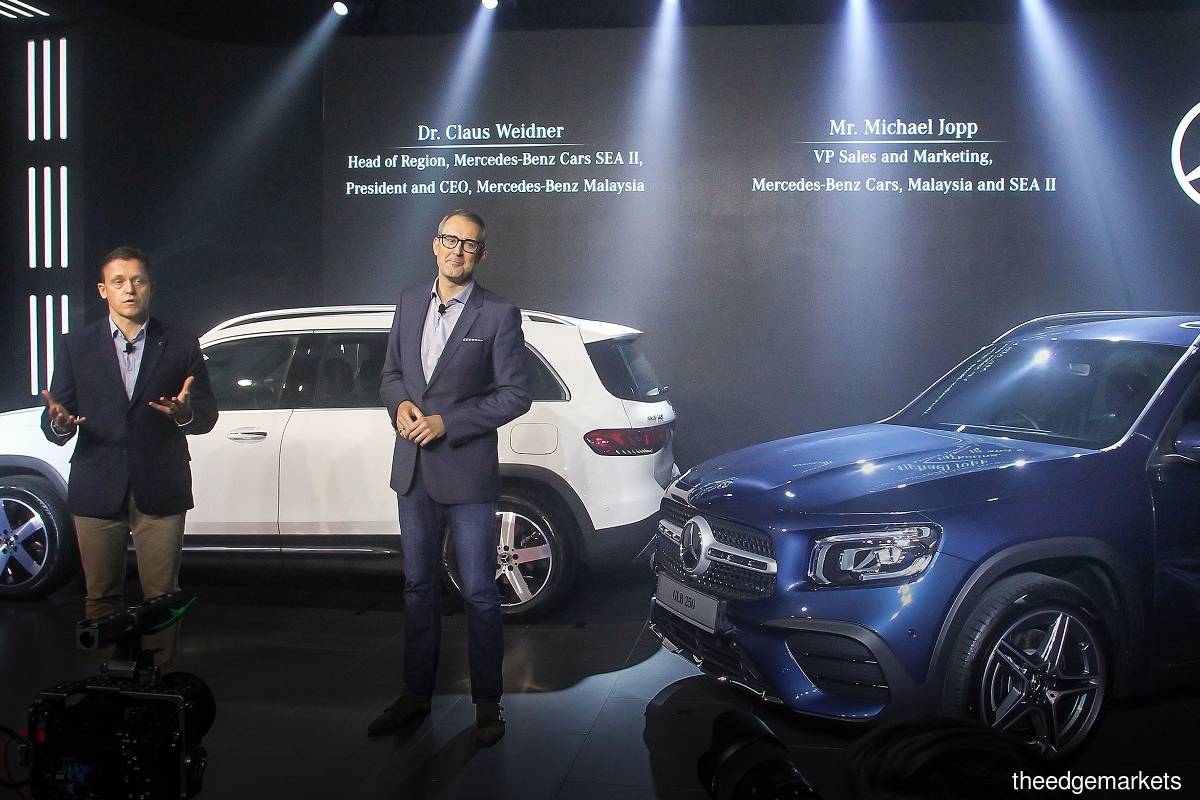 Weidner (left) and Jopp at the launch of the X247 Mercedes-Benz GLB on Sept 22. (Photo by Kenny Yap/The Edge)

At the unveiling of its new Mercedes-Benz GLB model, the firm's president and chief executive officer Dr Claus Weidner said he is positive about the recovery of the demand for its cars, supported by the sales tax exemption from June 15 until the end of this year, citing that "demand in the last three months is higher compared to the beginning of this year [before the implementation of the Movement Control Order] and the end of last year".

"There was some period of time, [about] two to three months, where we basically could not deliver cars or delivered fewer cars, [and] there is definitely [an] impact [on] the overall sales.

"But, in the last three months, we were happy to see the demand going up, [as a result of] combining the sales tax incentives which are given by the government together with special packages for our models. With such incentives, we are seeing demand growing... In that sense, the demand is strong also in this month.

"I hope this [strong demand] will continue until the end of the year," he said, adding that demand for vehicles will also depend on several factors such as the economic situation and customer sentiment.

When asked why demand for premium cars is growing despite the challenging economic conditions, Weidner said: "It is a general phenomenon in the car market. Not only us, the automotive industry is very positive in this period of time.

"We are in the higher [price] segment, which gives us certain benefits. This is because of the economic feasibility from our customers but we [are] also benefitting from overall sentiments in the market together with the incentives given by the government," he explained.

The Mercedes-Benz GLB, which was launched in Malaysia today, comes in two seven-seat variants — the GLB 200 Progressive Line and GLB 250 4MATIC AMG Line — and an AMG model in the form of the GLB 35 4MATIC. The Mercedes-AMG GLB 35 4MATIC from the back The Mercedes-AMG GLB 35 4MATIC from the front

In a press statement, MBM vice president of sales and marketing for passenger cars Michael Jopp said GLB is the most versatile sport utility vehicle (SUV) in its premium SUV range.

"Its iconic design lends the GLB an unmistakable SUV character, showcasing its classic off-road boxy design from its big brother, the G-Class. With a boot capacity of up to 1,805 litres and a third seat row, it is the perfect companion for those who desire a life with more possibilities," he added.

Meanwhile, Weidner said Mercedes-Benz is not only the inventor of the automobile but also the forerunner of the premium SUV segment.

"With the introduction of the new GLB, we offer our customers a new variety that promises all the traits of the brand with practicality," he continued.