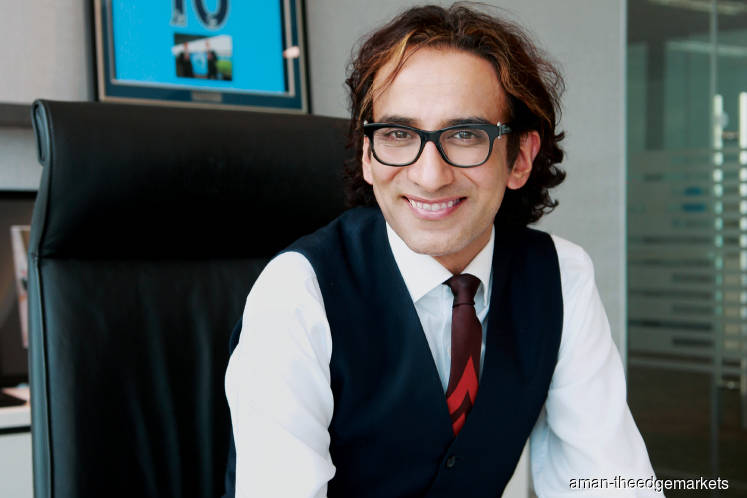 Mundipharma International Ltd has been around for more than 60 years, but not many people in this part of the world have heard of the pharmaceutical company. That is why seven years ago, it hired Raman Singh out of London, where he was GlaxoSmithKline’s emerging markets vice-president of commercial operations, to play a similar role in this company.

He was tasked with opening up emerging markets such as Asia, Latin America, the Middle East and Africa. Why had such a venerable company stayed out of these markets? “The developed world has healthcare systems that pay for medicines,” says Raman.

Emerging markets typically do not. It was as simple as that. He opted to establish his base in Singapore, mainly because China was a big part of the company’s growth agenda.

After trundling along respectably for six decades, it was as if the company had been suddenly been put on steroids. “We expanded from a therapeutic standpoint. Previously, we were only in one disease area. Now, we are in six. We have expanded the number of medicines and products — then, we only had three products but now, we have close to 47,” says Raman.

The company has also expanded geographically to Asia and Latin America. “We have commercial operations everywhere now,” he says.

Last year, Raman was promoted to global head. But he decided to stay put in Singapore, mainly due to the canny intervention of the government — which offered him attractive tax rates — but also because this is where the growth is.

“Growth in Europe is in the low single digits. In the US, it is either declining or stable at best, depending on the portfolio you have. So, most of the growth is coming out of emerging markets. Though it is challenging to be here, this is where the future lies,” says Raman.

Not only has he been responsible for the company’s expansion into new markets and products, but he has also changed the way it thinks about its core function. “Healthcare used to be a very reactive kind of system. You feel unwell, you go to a hospital, consult a physician and take medication. It is moving from reactive to predictive and eventually to a preventive system,” says Raman.

Technology has enabled this shift. “I mean today, you can be tracked 24/7 and the system can predict whether or not you will suffer from a potential fatality. One example I always give is that today, there are US Food and Drug Administration-approved devices that are currently in-clinic that allow you to predict whether you will get a heart attack about 14 days before it happens. You could then implement some measures to prepare yourself for the eventuality or prevent it from happening,” he says.

Raman thinks that pharmaceutical companies have been slow to recognise this shift. “They have used the excuse of having a regulatory framework that does not allow things to happen that fast.”

But he is not buying this. “Yes, it is a regulated industry. But there are still many things that can be done and we are not doing them.”

But if these pharmaceutical giants continue to snooze, they will definitely lose. “Amazon has already bought Whole Foods and is changing the way groceries are sold. Next, it will buy a pharmaceutical company because that would be the quickest way to learn the industry and then digitise and automate things,” says Raman.

With him at the helm, however, Mundipharma has been making strides in this direction. “In the last three years, I have focused on driving the company towards the space where we should be a digital company in healthcare rather than a healthcare company digitising things,” he says.

The company is running a number of experiments around the world. “These could be for devices that need approval, algorithms or technology for a mobile app in spaces such as ophthalmology, respiratory, pain, over-the-counter (OTC) medication and personal hygiene. So, we have opened up a number of chapters because we do not really know what we don’t know. And one of the ways to learn is to quickly run multiple experiments in parallel so we can understand what sticks and what falls,” says Raman.

But it is not just about technology. He is also keen to humanise big pharma. “I think the reputation of the healthcare industry is worse than that of the tobacco industry because you make all these margins at the cost of others not having access to basic medication,” he says.

Raman wants to do things differently. “Our vision was: Let’s provide access to people who need it the most and that affordable medicines should be made available around the world.”

One of the company’s more creative uses of technology is using drones to deliver medication in parts of Africa that do not have access to basic medication.

“When I joined the company in 2011, the agreement was to grow the emerging markets business. Last year, I got the global remit and one of the big things was expansion into Africa, where you just do not have the logistics providers, healthcare professionals and hospital infrastructure,” says Raman.

“We are talking about a lot of basic care that does not exist. This is also the situation in some parts of rural China and technology is enabling us to have remote detailing, remote consulting and things like using drones to deliver medicines.”

For a healthcare company to get a technology approved, it has to prove that it is better or equal to the current standard of care. “For instance, look at the way we measure pain. Cancer patients have horrendous pain that cannot be resolved with a Panadol or Tylenol and they need to see a doctor who will ask them to rate their pain on a scale of 1 to 10. It is relative and there is no science to it. It is your tolerance that defines pain,” he says.

Mundipharma is working on a device to measure pain in a more scientific way. “This device can be strapped around your arm and it will monitor your day-to-day functions and routines 24/7 such as how well you sleep, whether you are able to drive, whether you take the stairs and whether you can actually do your work. It does not ask you all this — it just tracks you,” says Raman.

If someone’s quality of life is being compromised because of pain, the device will pick up on it. “A lot of pain medication is titrated up. So, if you take 20mg and you still have pain, you go up to 30mg and then 40mg or whatever until you can tolerate the pain,” he says.

Raman says this device tracks your daily routine and translates this into a pain score. “Now, for us to roll this out and for the FDA, European Medicines Agency or any regulator to approve it, we have to prove that it is better than the current standard of care, which is a questionnaire.”

This involves clinical trials on a lot of patients in a lot of hospitals, which are engaged in comparing both pain scales.

Another experiment is being done on a device that tests for glaucoma. “If you want to check whether you have glaucoma, you go to an optometrist, who will use a huge machine where you put your eye into it and track colours and all that. Often, the detection of glaucoma is not accurate — either you have it and you don’t know that you have it, or you don’t have it and they say you need to take medications for it,” says Raman.

Mundipharma is testing an Oculus device to see if it can detect glaucoma more accurately. “You put it on and play a game. And the device tracks, through the way your eyeballs move, whether you have glaucoma. You are not asked anything,” he says.

It takes time to get the approvals as these are fairly comprehensive and complicated devices. “It is not like downloading an app or buying something from Amazon. It needs to be validated and that is what we are doing,” says Raman.

On the other side of the equation, it is involved in technology for basic hygiene. “We figure that with the Middle East Respiratory Syndrome, Severe Acute Respiratory Syndrome and all these infectious diseases, the genesis of it is that people do not wash their hands regularly,” he says.

The company is carrying out a huge project with the government of Saudi Arabia to encourage people to wash their hands during the haj. “We have these devices or laptops planted everywhere, where you can learn how to wash your hands. We are doing this in Singapore with the public schools as well,” says Raman.

All these, he points out, are part of the company’s efforts to transition from a reactive to a predictive and eventually preventive model of healthcare. This also involves hiring people with a different mindset.

“I have created a new digital organisation where we have hired the right kind of people: those who understand this and are not typically from the healthcare industry. I am not saying that people from healthcare are not tech savvy — some of them are — but I am talking about people who come from environments where you try 100 things and fail in 90 of them. You fail fast and move on. Do not linger with that particular project,” says Raman.

He has hired people from the likes of Google, Amazon and Uber. “That is, people who have really created these kinds of businesses and have moved, or want to move, into the healthcare space. And let me tell you, they are not moving into it for the money, but because they truly believe they can change things,” he says.

Raman says that for the Gen Y especially, it is about work that has a deeper meaning. “They are brought up in an environment where they think a lot bigger. There needs to be a purpose to what they do. And that is why they would want to move into this space.”

He points out that innovative medication has been declining because new patented drugs cost so much. “They have been declining in Malaysia, but you can see that the generics are rising way more [than the decline] because healthcare needs are such.”

This is Raman’s first trip to Malaysia. While he has established Mundipharma’s brand in Singapore, he has yet to do so in this country. So, not many people here have heard of the company (although they may have heard of some of its medications such as Betadine).

“There are many advantages to being a privately held company, which we are. But there are also disadvantages because you do not trade in the stock market — there are no quarterly earnings reports and we do not get analysts on a call. So, our reputation is built on what we do personally. And that is what we are trying to do now in the rest of Asia,” says Raman.

Mundipharma’s plans for Malaysia are no different from its plans globally. “We want to make sure that every medicine we have in our portfolio is launched in Malaysia, be it in ophthalmology, pain, respiratory or oncology. The same goes for our OTC medications, whether in the space of wound care management or oral care or personal hygiene. We want to make sure that all our products get launched in this country and reach as many people as we can,” he says.