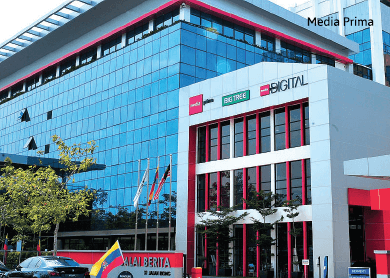 Its net profit was RM42.18 million or 3.82 sen per share in the corresponding quarter last year. Its latest quarterly revenue, however, fell 4% to RM365.37 million from RM379.60 million, its filing to Bursa Malaysia today showed.

The group declared a second interim single-tier dividend of 2 sen per share for FY15, payable on Dec 30.

Media Prima said its performance for the cumulative period was affected by lower advertising expenditure (adex) and subdued market sentiment.

The group said its television (TV) network platform saw lower revenue (down 3%) and profit after tax (PAT) (down 4%) for the period, due to softer adex, while its free-to-air TV adex saw increasing competition from pay TV and data-centric and cost-efficient digital advertising revenues.

Its print media segment also saw lower revenue (down 8%) and PAT (down 26%), due to lower advertising and circulation revenue.

Its radio network and content creation platforms also posted improved performance for the period, registering a PAT growth of 4% and over 100%, respectively.

Looking ahead, Media Prima expects the challenging environment to remain for the remainder of its financial year, as consumer preference gradually shifts towards digital media, while the group's core business continues to be dominated by traditional media platforms.

The group said it will introduce new programmes to maintain its leading viewership positions for its TV network segment, with the platform exploring new non-traditional revenue streams.

For its print media platform, it maintains a challenging outlook as consumers' preferences shift towards digital media.

"New marketing and readership initiatives are constantly being executed to address advertising and circulation challenges, while seeking to grow digital presence of its brands. The practice of efficient production and cost management is also expected to improve margins and performance," it said.

Similarly, its radio network platform will be engaging with listeners via various online and social media outlets to maintain and strengthen its listenership, while also offering attractive deals across its radio stations.

"Concurrently, the group will continue its effort in managing costs and improve operational effectiveness and efficiency. In view of the above, the board expects the group's financial performance for 2015 to remain resilient," it said.