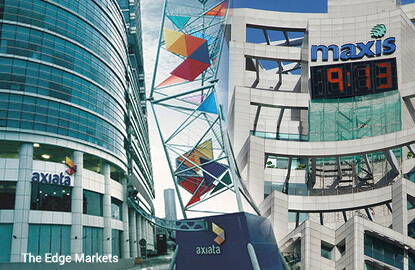 KUALA LUMPUR (July 4): Advanced discussion on the impending implementation of the reallocation of spectrum by the telecommunication players by July 1, 2017 saw increased activity in counters like Maxis Bhd and Axiata Group Bhd today.

The active trades were further boosted by Employees Provident Fund (EPF)’s raised shareholdings in Maxis and Axiata to 7.86% and 14.69% respectively.

Whereas Axiata, which operates the Celcom network, revealed EPF’s equity to be 1.26 billion shares or 14.39% as at March 31, 2016, making it second to Finance Ministry’s Khazanah Nasional Bhd, which owned 3.37 billion shares or 38.21% stake.

Meanwhile, MIDF Research in a June 30 note, said it learnt the Malaysian Communications and Multimedia Commission (MCMC) was in advance stages of discussion with four main telcos, namely Digi.Com Bhd, Maxis, Celcom Axiata Bhd and U Mobile Sdn Bhd, relating to the fee for the reallocated spectrum.

“Recall that in February 2016, MCMC outlined the plans to reallocate the 900Mhz and 1,800Mhz frequency bands among the four telecoms operators, which will be implemented by July 1, 2017,” it said.

MIDF Research pointed out that MCMC might consider fee structures such as pure upfront payment, upfront payment with a recurring annual payment, or a lump sum upfront with annual fees.

However, it views upfront payment with a recurring annual payment as the most likely structure that would evenly spread out the cost of spectrum over a longer period of time.

Thus, there would not be a sudden surge in capital expenditure for the telco operators that are involved.

MIDF Research maintained a “neutral” call on the telecommuncation sector, pending MCMC’s announcement on the spectrum fee and fee structure.