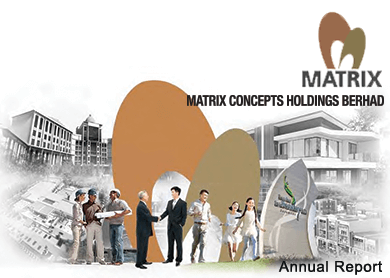 KUALA LUMPUR (May 12): Property developer Matrix Concepts Holdings Bhd's net profit for the first quarter ended March 31, 2015 surged 199.5% to RM115.45 million from RM38.55 million a year earlier on the back of an increase in revenue recognition from its sales of development properties resulted on the accelerated project completion.

In a statement today, the company said its revenue for the quarter jumped 135.8% to RM317.6 million from RM134.6 million a year earlier.

Matrix Concepts declared a first interim single tier dividend of 4.25 sen per share, to be paid on July 9.

In a statement today, the company’s chairman Datuk Mohamad Haslah Mohamad Amin said the group’s success early this year was driven by quicker construction progress of its ongoing residential projects, as well as accelerated payments by investors for industrial properties.

He said that of total 1Q15 group revenue, residential and commercial properties contributed RM220.8 million, increasing from RM99.6 million a year ago; while sales of industrial properties and land made up the remaining RM94.6 million, rising from RM35.1 million previously.

Mohamad Haslah said Matrix Concepts had unbilled sales amounting to RM392 million as of end 1Q15, which would last the group until 2017.

“Despite the property sector’s weaker sentiment, we believe that demand for our residential properties will remain intact in line with the population growth of Negeri Sembilan, and growing acceptance by Kuala Lumpur dwellers to purchase a property located throughout the Greater Klang Valley region,” he said.