Masterskill aims to break even next year

TERTIARY education provider Masterskill Education Group Bhd (MEGB) aims to break even next year by increasing its student enrolment to about 3,000 from the current 2,000, says its largest shareholder and executive director Siva Kumar Jeyapalan.

On the sidelines of a memorandum of agreement signing ceremony between

Asiamet Executive Education Centre Sdn Bhd and China-based BBQ Global Connection to train 10,000 Chinese students, Siva tells The Edge that MEGB has brought down its costs by closing down some of its campuses.

“However, to say that we will see a huge enrolment next year, I wouldn’t know. But we have done some programmes [to promote Masterskill and its courses to students sitting the Sijil Pelajaran Malaysia examination this year], which you will not see the impact yet,” he says.

“We have scaled down our operations. Our fixed cost has come down because from six campuses, we have come down to three. But the biggest challenge is increasing the top line.”

MEGB has sold its Ipoh campus. Siva says there are parties looking at buying its Kota Baru campus, which was initially planned to be converted into a medical centre.

The group now has three operating campuses — its flagship Asia Metropolitan University in Cheras and one each in Kuching and Kota Kinabalu.

For the six months ended June 30, 2014 (6MFY14), MEGB posted a net loss of RM9.93 million on the back of RM19.3 million revenue. This is a smaller net loss compared with the RM30.4 million in the previous corresponding period.

MEGB has been in the red for 11 consecutive quarters due to low enrolment of students and excess capacity at its six campuses previously. The problem was exacerbated when it was reported that the National Higher Education Fund Corporation (PTPTN) may be facing huge deficits come 2016.

A majority of Masterskill’s students are funded by PTPTN loans. The view that the market is unable to absorb the rising number of nursing graduates also led to a loss of confidence in MEGB, as it is the largest private tertiary education provider in that field.

However, according to Siva, there is no lack of demand for nursing graduates. He claims that the problem is the lack of training, rendering these graduates unemployable by hospitals and medical centres.

“Assuming I am the best medical student from the top university in the world. If I come here, just graduated, and opened my own clinic, would you come and see me? Certainly not. Similarly, you can have your degrees, but if you don’t have the experience, you can’t get employment.”

It is the government’s responsibility to build more training hospitals to absorb the nursing and other allied health sciences graduates, says Siva.

Besides being loss-making since 2011, investors are questioning the direction that MEGB is taking. In April, MEGB acquired 118 million shares in Hong Kong-listed food chain Gayety Holdings Ltd for RM19.98 million.

MEGB said the acquisition was a step to enlarge the scope of its education business as well as diversify into other businesses in the region. However, it disposed of the stake in August and realised a gain of RM12.3 million.

“We are in the education business and are growing it. Next year’s intake is the key. We are not changing our direction and we are not going into something different,” says Siva. 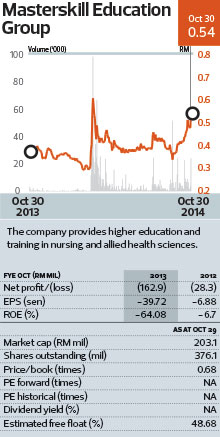 Investors are also asking whether MEGB has a controlling shareholder who will stay and grow the group’s education business. In March, Siva entered into a put and call option with Hong Kong-based Malaysian businessman Gary How Soong Khong to sell his entire stake in MEGB.

However, he terminated the option in September as he did not think How was able to exercise it. It is interesting to note that How is MEGB’s CEO, appointed on Aug 6.

Siva says as he is a practical person, he would consider selling the stake if someone offers an attractive price. He adds that coming from a merchant banking background, he does not fall in love with his investments.

He says after terminating the put and call option, he can now sell the stake to other parties when an attractive price comes along. He claims that many parties have approached him to buy the stake, including Temasek Holdings’ Baring Private Equity.

“Many people are talking to me … it is only a matter of price and what they are going to do with the business. I just can’t sell at a price. I also need to see what’s going to happen to the business. Whoever comes in and takes over, he needs to bring the business to the next level,” says Siva.