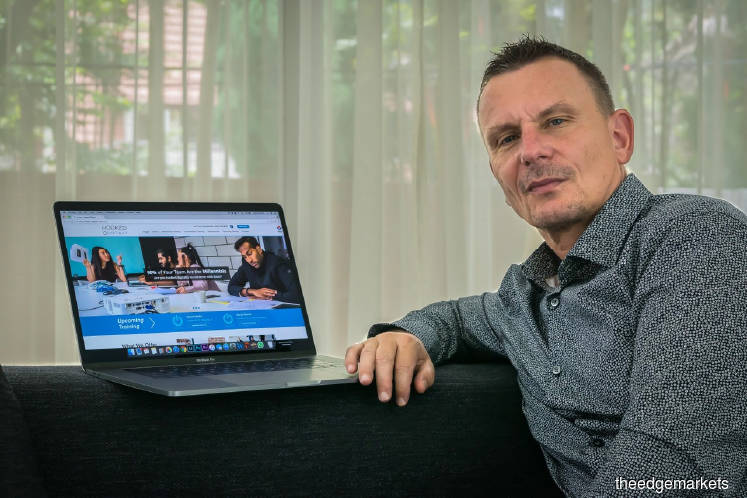 Asean, with its sizeable population and under-tapped e-commerce potential, is set to become a nucleus for digital marketing. But, right now, it lacks not only the talent and expertise in this area but any proper training to develop such talent.

This is why Felix Heinimann and his partner Sze Suen Lee set up Hooked Digitally Sdn Bhd, which has teamed up with the reputable UK-based Institute of Direct and Digital Marketing (IDM) to bring training courses to Asean in the fine art and science of digital marketing.

“The penetration for e-commerce in Singapore is about 4% and all other markets — Thailand, Malaysia, Indonesia — it’s below 1%. So if you take the population and the penetration of e-commerce transactions in comparison to other countries, there is a huge mismatch.”

Heinimann, who is a shareholder in communications and public relations agency, essence Burson-Marsteller, also finds that in his daily job at the agency, everybody wants digital solutions. “But digital solutions don’t stop at Facebook and Twitter and Instagram. They want an integrated solution that includes channel conversions, content management, customer retention and so on.”

In other words, it’s highly complicated and technical and people need the right kind of training for it. But when the two partners looked around, they could not find any bachelor’s degree in digital marketing in Asia.

The other factor that led to the setting up of Hooked Digitally was that at most of the multinational corporations, digital heads were not trained for the position. “These people learned by doing. They did not come into the position of head of digital by studying for it or being educated in it. They were marketing people or, maybe, economists who moved into digital lead positions for a company by doing what they are doing,” says Heinimann.

Things are different in Europe and the US, where the digital space has had more time to mature. “There are specific courses, bachelor’s degrees that you can do today in digital marketing over there,” he says.

But isn’t digital changing so quickly that any course material would be out of date as soon as the candidate graduates? “No,” says Heinimann. “The technology and analytics are changing but the foundations can be taught.”

When Sze and Heinimann spoke to business owners in Asia, whether they were start-ups, small and medium enterprises or even large-scale corporations, two things emerged: “They didn’t have the talent and they are still concerned about the technology of the e-commerce business,” says Heinimann.

Technology would include logistics solutions, billing and payments. In addition, they could not find people who could do a compelling story of digital marketing. “So, how do I build a strategy for digital marketing and engage it with social content? The lack of digital talent is enormous,” he says.

Heinimann believes the technology factor can be overcome but digital talent will remain an issue. “So, if you don’t have the people who can actually handle the communication and content and turn it into a success story to sell something, you have an issue.”

In his conversations with companies, Heinimann discovered that what people would actually like to have is structured training to understand what is going on in the digital world. Too many bosses were having to rely on what their digital team was telling them, without any idea if any of it was true.

The partners looked for an institute in one of the developed markets that had been doing these courses for years to team up with. “So that’s how Hooked Digitally came together with IDM, which is UK-based and European-certified. It does nothing other than direct and digital marketing courses. Our goal now is, first of all, to focus on interactive courses, mostly two-day courses across the board of direct and digital marketing. That of course includes social media, mobile marketing and so on.”

Hooked Digitally signed a contract to be IDM’s principals in

Asean. “So we take the existing product in Europe and bring it to the Asean market. The key difficulty to doing it in Asean is that it has to have relevance to the region,” says Heinimann.

Its first two-day course, which runs this month, will focus on social media. On the first day, the focus will be on strategy and, on the second, tools and tactics. So far, more than 50% of those who have signed up for the first course are SMEs.

Heinimann says all courses have a maximum of 20 people per class and the tutors all have some sort of background in Asia. “Either they have worked and lived here or are working here. Everybody on the faculty is a professional. I think that is very important. And before the course, we get in touch with the participants to find out what they actually want to learn. So it’s a very interactive way of teaching.”

The second phase will involve structuring an academy here for direct and digital marketing qualifications, similar to what IDM is doing in the UK.

To begin with, the training will be horizontal. “Once we get traction, we want to go for verticalisation of training. That means teaching by industry — automotive supplies, healthcare supplies, logistics solutions and entertainment. Because if I’m selling healthcare equipment as a Malaysian and I get the digital marketing course on healthcare equipment in Asean, it’s a totally different story,” says Heinimann.

Structuring an academy will take much longer because of all the regulatory hurdles. “You have to look at Ministry of Education regulations or barriers in a certain culture. Right now, we are talking about courses, and that’s the start of building a foundation and awareness of the content,” he says.

In terms of customised training, Heinimann says the company has been getting a lot of interest from the banks. “They are very lost, especially in terms of how to communicate with consumers because it is such a different language. They want us to customise a course which really shows them how to build compelling stories. So the potential training and education for the digital market is actually endless.”

The digital space is very different from print or television and it has to capture attention in a very short space of time. “If you’re lucky and you have a good visual, it can capture 20 to 30 seconds of attention and that’s it. If you have only text, it’s around seven seconds,” Heinimann says.

This is where the compelling story comes into play. “The classic teaching of marketing was that you are going to build your brand attention with events. You have events and you build awareness of the brand and then you start telling people why you are using this singer or whatever to build brand relevance and brand understanding,” he says.

This hasn’t changed with digital. Heinimann says, “To really catch you, I need to get you digitally hooked to my social media site, so you can see how the brand’s values resonate with yours. And that is where it gets so difficult with digital media, because you are overwhelmed with so many things. So, as I said before, you need to be able to make a compelling story.”

At the end of the day it is about price, looks and having an innovative campaign. “We do a lot of healthcare clients and they are using a lot of digital solutions in healthcare. When you talk about the pharmaceutical or healthcare industry per se, in print, you can do a very compelling story, but you can never actually reach a human life as effectively as when you have it as an audio-visual solution,” says Heinimann.

He says the agency started to use digital technology to reach out to patient groups and show, not just the life of the patient but of everyone who is affected by their illness, such as their relatives and friends. “We were talking about things you don’t see or hear so much. So all the stories on the AV side, which we then deploy to multiple stakeholders, have a much more effective reach than you can do even on TV, because social media gives you the chance to communicate with each other.”

And this is where, he says, the courses that Hooked Digtally offers, come into play. “It is not just about building brand awareness. It is about what kind of digital possibilities there are out there to build your actual business strategy. Facebook, Instagram, Twitter ... these are just equipment,  not the strategy. It is about embedding direct and digital marketing into your business strategy.”