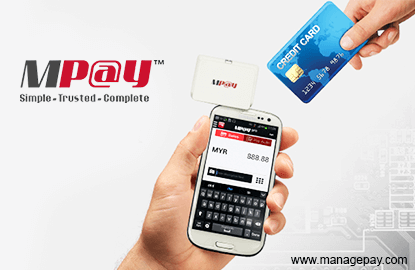 KUALA LUMPUR (July 25): ACE Market-listed ManagePay Systems Bhd has received the licence to conduct domestic fund transfer activities among its e-Money users via its MPay Portal and MPay Wallet from the central bank.

In a filing with Bursa Malaysia today, ManagePay said it had received from Bank Negara Malaysia (BNM) the Class B Licence to carry out money services business for a one-year period for issuance of electronic money pursuant to the Money Services Business Act 2011.

The licence is renewable yearly, said the company in the filing.

The company continued its streak of quarterly losses in the three months ended March 2016 (1QFY16) with a net loss of RM1.58 million. Its turnover plummeted by 64% because of lower sales after completion of one of the key projects in the SME segment and the delay in launching of MPay eMoney services and Chip & Pin payment card acceptance project, it said.

It began to make losses in 3QFY15, bringing the full-year's net loss to RM11.05 million, as it had to incur a one-off provision of RM7.21 million for impairment of older Chip and Sign technology related inventory and fixed asset.

ManagePay shares have fallen by more than a third since the turn of 2016, as it closed at 19 sen today. It has a market capitalisation of RM134.99 million.