Malaysian stock market may be buoyed by Najib budget 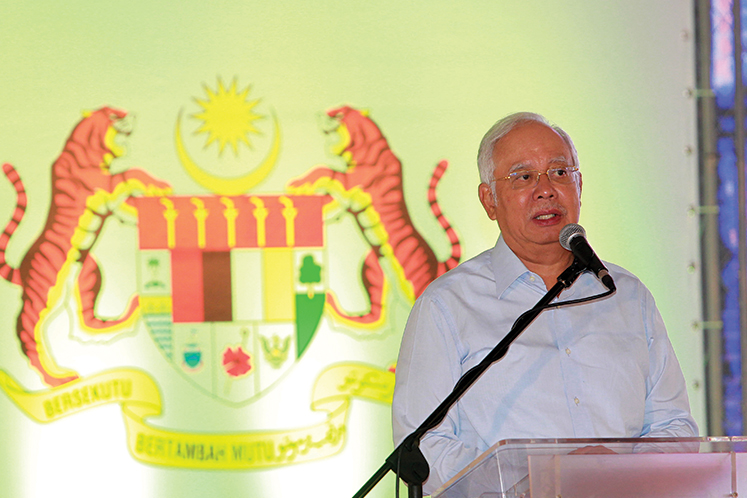 KUALA LUMPUR (Oct 16): Malaysia’s government spending could revive gains in the stock market that is Southeast Asia’s worst performer despite receiving the most foreign investment in the region.

The 2018 budget to be released on Oct. 27 is likely to include an increase in cash handouts and infrastructure spending that will filter through to consumption stocks, builders and construction material suppliers, said Rudie Chan, the chief investment officer who oversees 40 billion ringgit ($9.5 billion) at Eastspring Investments Bhd. in Kuala Lumpur.

Prime Minister Najib Razak has said the budget will address the cost of living for citizens and also housing issues, according to the official Bernama news agency.

“The budget is going to be expansionary, there’s no question about it,” said Chan at Eastspring, whose Malaysian small and midcap fund has returned an average 24 percent annually over the past five years to beat 90 percent of its peers. “It’s going to be an election budget essentially.”

Najib’s spending plan, which will be the final one announced before a national election that must be called by mid-2018, could help spur gains beyond technology companies that have been the best stock performers this year. While Malaysia has received RM9.5 billion in foreign investment since the start of January as its economy grew at the fastest pace since 2015, the FTSE Bursa Malaysia KLCI Index has only added 6.9 percent, lagging behind the 23 percent gain by the MSCI Asia Pacific Index.

Even as gains on the KLCI index of 30 companies lagged regional peers, technology-related shares not tracked by the benchmark have fared better. The Bursa Malaysia Technology Index, the best performing industry gauge out of 10, has jumped 77 percent this year and closed at a 12-year high on Friday, driven by the global demand for electronic products that are fed into the global technology supply chain from the country.

Property developers including Mah Sing Bhd. and SP Setia Bhd. could benefit from the upcoming budget, as Najib is set to address the lack of affordable housing, according to a report by Ivy Ng Lee Fang and Michelle Chia, analysts at CIMB Group Bhd., the nation’s second-largest bank by assets.

“This would be an election budget that would pull out all the stops I suppose in terms of ensuring that the rakyat is shielded to a certain extent from the higher cost of living,” said Geoffrey Ng of Fortress Capital Asset Management Sdn, using the Malay term for the citizenry. The budget would likely give a boost to lower-income-related consumption stocks and Fortress is trading selected construction and property-related companies, Ng said.

Yet even with a potential boost from the budget, Malaysia is less attractive than its peers, said Ng, who is underweight the nation. Hong Kong and, to a certain extent, Singapore are more liquid and have cheaper valuations, he said.

For Eastspring, trends in consumer spending will determine how the stock market performs. Investors should watch out for any gains in expenditure on products ranging from cars to basic staples, as government initiatives become the market’s next big driver for the following couple of quarters, Chan said.

Malaysia’s consumer spending surged 7.1 percent in the second quarter from a year earlier, rising at the fastest pace in more than two years. Clothing retailer Padini Holdings Bhd. has surged 88 percent this year, as profit for the financial year ended June rose 15 percent to RM157.4 million

"You really have to deep dive and research on companies that are still undervalued and under-appreciated,” Chan said. “The market is basically a stock pickers’ market."