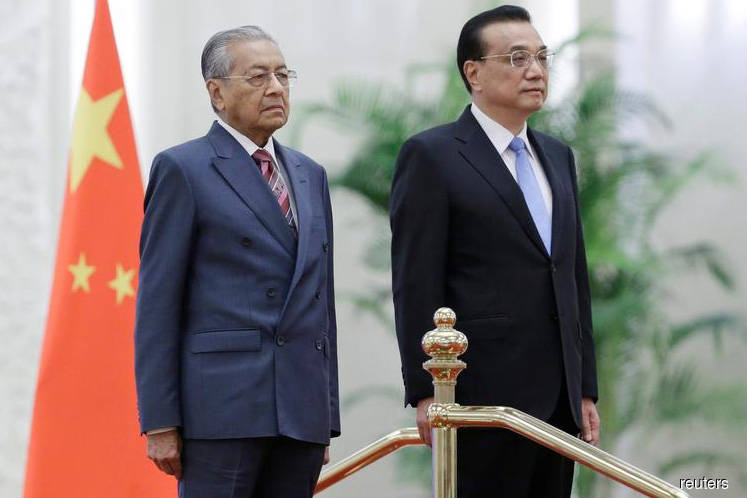 BEIJING (April 25): Malaysia has signed a framework of agreement with China this afternoon to revive the former's Bandar Malaysia project — the massive real estate development at the former air-base near Sungai Besi, Kuala Lumpur.

The signing of documents, which was not on the original agenda, took place after the official meeting between Dr Mahathir and Li.

This is the second hand shake that Dr Mahathir has had with Li.

During the meeting, Dr Mahathir reiterated that Malaysia values its diplomatic relationship with China, which started in 1974.

"Malaysia has always wanted to have a friendly relationship with China. Malaysia is supportive of China's policies. We hope that the (diplomatic) relationship will continue.

"We know that China is a powerful country and it is the second-largest economy in the world. We hope we could derive benefits from your growth," Dr Mahathir told Li.

Dr Mahathir noted that Malaysia hopes to strengthen its diplomatic ties with China in a tangible way, knowing that the vast mainland is a great market.

He cited the example of palm oil and durian, saying if each Chinese is taking one spoonful of palm oil a day, Malaysia as a country will be rich.

On China’s side, Li also stressed that the country intends to further strengthen diplomatic ties between both countries.

Li also emphasised that China is supportive of the Asean alliances.

On Bandar Malaysia, Dr Mahathir announced the revival of the development project last Friday (April 19) by agreeing to sell a 60% stake in project to IWH-CREC Sdn Bhd for RM7.41 billion. IWH-CREC will be paying RM1.24 billion deposits within 60 days.