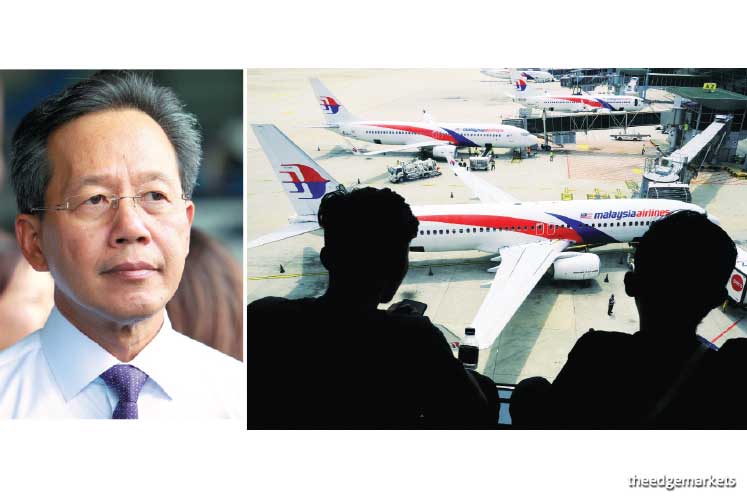 Izham (left) warns of more cost-cutting in the coming days.

According to a video to the national airline’s 13,000 employees yesterday and seen by The Edge Financial Daily, Izham said the move is part of measures to address a sharp downturn in demand amid the Covid-19 outbreak.

He warned that more cost-cutting will be introduced in the coming days.

“You have heard over the past couple of weeks of how airlines around the world from Emirates to Cathay Pacific, Singapore Airlines (SIA) and Malindo Air have been forced to take hard measures to preserve cash flow. The senior leadership team and I have also been brainstorming potential measures to do the same for MAG (Malaysia Aviation Group) and we will decide the immediate and long-term actions in a matter of [a] few days,” he said in the video.

“I will reach out to all of you (employees) more in the following days and weeks on what we need to do. [So far,] we have introduced huge capacity cuts. In the first quarter of 2020 (1Q20) alone, we removed 7.1% of our [flight] capacity. To date, we have cancelled more than 1,600 flights and the number is increasing,” he added.

Izham noted Malaysia Airlines has cut capacity to China by 53% and that to South Korea and Japan by 23%. “At the rate and momentum of this crisis, more flights will have to be cancelled because there is just less demand in the marketplace,” he said.

“The [Covid-19] impact on the market is tremendous. People are not travelling. Businesses are not operating as they used to be and the aviation landscape has changed tremendously. MAG is not spared from all of this.”

According to reports, SIA is cutting its senior management’s salaries by 10% to 15% starting March 1 and offering a voluntary no-pay leave scheme to employees, while Malindo Air will be imposing a 50% pay cut on its staff in addition to two weeks of unpaid leave to cope with the Covid-19 impact.

The Malaysia Airlines video also addressed the carrier’s performance in 2019, with its revenue per available seat kilometre (RASK) recording a 3% year-on-year (y-o-y) increase while its yield rose 5% y-o-y on a 5% y-o-y growth in capacity.

“We achieved a record-breaking RASK results in 2Q to 4Q of 2019, with the highest RASK ever recorded in three years,” said Izham.

He noted during the first year of implementing its new long-term business plan (LTBP), MAG — the holding company of Malaysia Airlines — achieved a "better overall group net income after tax (NIAT) performance compared to 2018, which was 18% ahead of budget”.

“[MAG] group revenue grew 7% y-o-y in 2019. The improved NIAT performance year-on-year was despite a higher fuel price by US$3 per barrel, a 3% increase in the US dollar against ringgit and the MFRS 16 (Malaysian Financial Reporting Standard 16) impact,” said Izham.

The airline’s LTBP would see the national airline achieving financial break-even by 2022 and generate enough income to cover the cost of capital for its operations two years later. Still positioning Malaysia Airlines as a premium airline, the LTBP consists of four pillars — right-sizing the airline’s fleet, providing a premium customer experience, having a partnership strategy and diversifying the airline’s revenue.

“[Going forward,] what we need to do better is in further bringing  down costs. Although we are already competitive compared to peer airlines, there is still room for improvement, especially in reducing wastages.

“Sadly, Covid-19 has hampered our momentum. It has been nine weeks [since the outbreak] and the cash flow [shortage] is not only impacting MAG but the industry in totality,” said Izham.