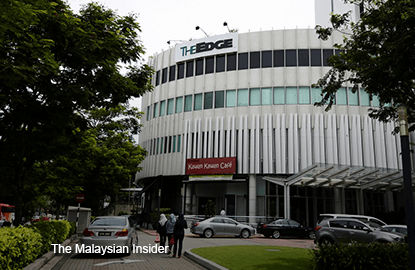 (July 27): The Edge Weekly and The Edge Financial Daily's three-month suspension starting today marks the government's continued tradition of clamping down on print media, a practice which began nearly three decades ago with the infamous Ops Lalang of 1987.

Most papers survived their suspension, even as it dragged on for months, with journalists reportedly taking up part-time jobs to support their families until the newsrooms reopened.

But some newspapers never recovered, while others never saw their suspensions lifted.

The Edge, however, which is being punished for its reportage on debt-ridden state investment firm 1Malaysia Development Berhad (1MDB), is fighting this.

This morning, The Edge will file a leave application for a judicial review.

Speaking to reporters after briefing The Edge's staff, hours after the suspensions were announced on Friday, The Edge Media Group publisher and group CEO Ho Kay Tat said: "We will be filing it on Monday and we hope to get a speedy hearing."

"We must file a judicial review as a matter of principle because we don't think the suspension is justified," he said.

Ho also said The Edge would continue reporting on 1MDB through its online platforms despite the suspension of the two papers.

"We will not apologise as we have not done anything wrong.”

The Malaysian Insider looks at the brief, yet colourful, history of media suspensions in Malaysia.

Within three years of the enforcement of the heavily criticised Printing Presses and Publications Act (PPPA) 1984, Malaysia witnessed what is often described as the worst attack on media freedom in the country.

In October 1987, The Star along with its weekend edition The Sunday Star, Sin Chew Jit Poh, and weekly paper Watan had their publishing permits revoked, just days after the government embarked on Ops Lalang, a crackdown that saw more than 100 political leaders and activists arrested and detained.

The next day, The Star was no longer available on newsstands.

After nearly six months, the papers were allowed to resume publications, but not without a price – for the newspapers affected, as well as the entire industry. Journalists spoke of self-censorship to avoid facing similar action, while Watan shut down in 1996.

In 2006, the controversial caricatures of Prophet Muhammad from a Danish newspaper were carried by several newspapers and TV channels, including Berita Petang Sarawak, Guang Ming Daily, Sarawak Tribune and The New Straits Times.

Sarawak Tribune, an English-language newspaper published in Kuching, Sibu and Bintulu, in Sarawak, was indefinitely suspended that year for publishing the caricature in an article titled Cartoon not much impact here on February 4, 2006.

The newspaper, which was established in 1945, reappeared in 2010 as the New Sarawak Tribune.

Chinese-language newspapers Guang Ming Daily and Berita Petang Sarawak were suspended for two weeks for carrying the caricatures in their newspapers.

Then prime minister Tun Abdullah Ahmad Badawi, who was also the internal security minister, suspended the permits under sub-section 6(2) of the PPPA 1984, Bernama had reported.

However, no action was taken against the NST because it had published an open apology for publishing a "Non Sequitur" syndicated cartoon on the Prophet controversy, Abdullah had said.

The Weekend Mail – the short-lived weekend issue of The Malay Mail – courted outrage among lawmakers when it published a series focusing on the sexual lifestyle of Kuala Lumpur's residents in its November 4-5 issue.

Then deputy prime minister Datuk Seri Najib Razak had said he received endless angry calls over the article, and said such stories could hurt the fabric of Malaysian society, the NST reported.

"The media going overboard in exploiting sex will only worsen our social problems," Najib reportedly said.

"The feature spoke of this and that position and I am not talking about positions during a football game or the Middle East position."

Home Ministry secretary-general Tan Sri Abdul Aziz Mohd Yusof said the reports and photographs were contrary to the values practised by Malaysians, according to The Star.

But the government suspended the Weekend Mail anyway, for breaching guidelines and conditions in the PPPA 1984.

Tamil daily Makkal Osai, or "The People's Voice" was slapped with a one-month suspension three days after it published an image of Jesus holding a cigarette and a beer can on the front page of its August 21, 2007 edition.

The caricature was published under its Quote of the Day column, with a caption quoting Jesus as saying that those who repent for their mistakes would enter heaven, according to Bernama.

The suspension came after Makkal Osai apologised for what it said was an oversight, the paper's general manager had reportedly said the picture was mistakenly inserted by a graphic artist.

2013: Putrajaya takes down The Heat

The official reason for the indefinite suspension was that the weekly had not informed the Home Ministry of changes in its ownership and refusal to respond to two show-cause letters.

But speculation was rife that the ministry clamped down on The Heat over its front-page article on Najib and his wife Datin Seri Rosmah Mansor's allegedly lavish lifestyle.

The suspension was lifted on January 27 the following year, but the weekly's return to the newsstands was short-lived. It was soon pulled off the streets and now remains a digital publication.

Failure to notify the Home Ministry that it had changed printers led to Tamil daily Thina Kural's three-month suspension starting on March 27, The Malaysian Times reported.

The suspension was also a result of the daily's error in publishing two different versions of the paper on January 24, causing confusion among readers.

Thina Kural editor-n-chief D.R. Rajan told The Malaysian Times that 63 families were affected by the suspension, and that the editorial team would continue to operate under a new publication called Tamil Puthiya Paarva.

2015: The Edge Weekly and The Edge Financial Daily

The Home Ministry on Friday suspended the publishing permits of The Edge Weekly and The Edge Financial Daily for three months beginning today.

Earlier this month, The Edge received a show-cause letter in which the ministry gave it seven days to explain why action should not be taken under the PPPA 1984.

The Edge was accused of publishing articles on the controversial state fund which were said to have created confusion and doubt about the Malaysian government and financial institutions.

The site was blocked under Section 211 and Section 233 of the Communications and Multimedia Act 1998, it said. – The Malaysian Insider