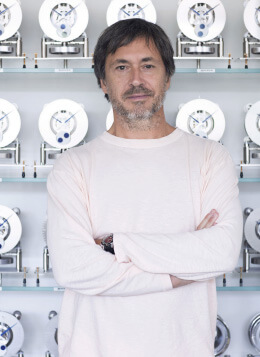 “As a designer, I think travelling is important – design has become such an international business today. Just look at the iPhone, and how it’s really the same object whether you’re in Paris or Patagonia. Other expressions of art, like music, art or film, are not like that.” 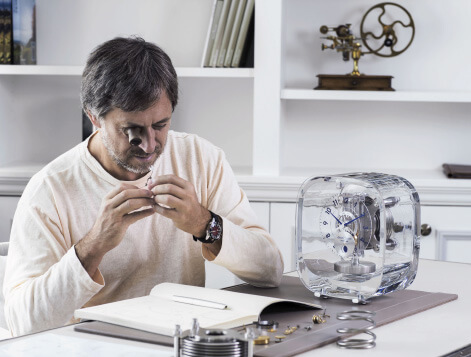 “The object itself is 90 years old and hasn’t fundamentally changed in that time – and yet, it’s such a contemporary object and is increasingly relevant today. A designer, it reminds me that it’s quite possible to be inspired by things that don’t change.”

In this exclusive interview, internationally-acclaimed designer Marc Newson discusses work, his design philosophy and his fascination for a certain luxury clock that has been keeping him busy indeed

Australian-born industrial designer Marc Newson is commonly regarded as one of the best of his generation. Famous for his unique approach to design, each new project is an experimental exercise in extreme structure and advanced technologies combined with a highly tactile and exacting exploration of materials, processes and skills. Newson graduated from the Sydney College of the Arts with qualifications in jewellery and sculpture, and at his first exhibition, he unveiled his most famous piece to date, the Lockheed Lounge. Throughout his near 40-year career, Newson has managed to extend his reach across several product categories — from concept jets, cars, watches, footwear and luggage to aircraft interiors. In 2014, Newson also helped his friend Jonathan Ive design the Apple Watch — an experience he calls “fascinating”.

Over the course of his career, he has been based in Tokyo, Paris and London, and is now back in Australia as Adjunct Professor in Design at the Sydney College of the Arts and creative director at the nation’s flagship airline, Qantas. Living in so many cities has informed and influenced his design elan most of all. “As a designer, I think travelling is important; design has become such an international business today. Just look at the iPhone, and how it’s really the same object whether you’re in Paris or Patagonia. Other expressions of art, like music, art or film, are not like that,” he remarks. “People like me rely on working in many countries and I think it’s important to travel and be immersed in various cultures. Different cultures solve problems very differently. If you compare the subways in Paris and Tokyo, you’d see that these two cultures do things so differently and they would never be the same, but they still work.”

The Lockheed Lounge, an aluminium daybed, best describes his style and aesthetic — linear and clean with a softness that is gentle and sensitive. Since then, he has created award-winning designs for a wide variety of household items, including chairs, tables, lighting fixtures and kitchen appliances. Indeed, his love for designing objects is best expressed in his range of beautifully crafted, limited-edition furniture, including the iconic Lockheed Lounge (1986), the Event Horizon Table (1992) and the Orgone Stretch Chair (1993). In a world where the distinctions between art and design are increasingly blurred, Newson pursued parallel activities in both exclusive and mass production, establishing a broad and diverse body of work.

He has engaged with the luxury industry often. He collaborated with Louis Vuitton for bags and Montblanc for the M pen, designed the decanter that presents the 2015 James Hennessy cognac and worked with the Ferretti Group on the ultra-luxurious Aquariva speedboat. Most recently, Jaeger-LeCoultre unveiled the third iteration of the Atmos clock that bears Newson’s design. The partnership is now his favourite.

“I’ve always had a healthy interest in the Atmos. I was very familiar with it, but obviously I didn’t understand how it worked. So, I was always interested to learn about it, and really quite thrilled at the chance to work on it. While I can’t say it has changed the specific way I think about design, it has changed me philosophically,” he shares. “The object itself is 90 years old and hasn’t fundamentally changed in that time. And yet, it’s such a contemporary object and is increasingly relevant today. It reminds me that it’s quite possible to be inspired by things that don’t change.”

Although Newson is primarily concerned with product design, he has also worked on notable interior design projects. He designed the Lever House Restaurant & Bar in New York in 2002 and the Canteen, also in New York, in 1999. In 2005, he designed the reception, meeting rooms and the sixth floor of the Hotel Puerta America in Madrid. Each of the twelve levels is designed by a world-renowned architect or designer.

The Top 5 A quintet of Newson’s most interesting designs

1 Responsibly sourced mammoth tusks are the star of a hand-hammered silver tea set that Newson created with Danish metalware brand Georg Jensen. Limited to 10, each made-to-order set includes a teapot, coffeepot, creamer and sugar bowls, and a tray. 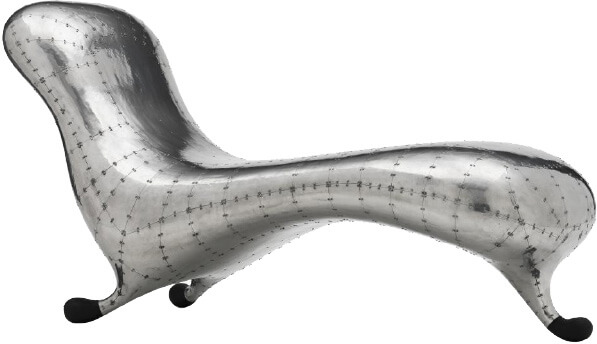 2 The iconic Lockheed Lounge is one of Newson’s earliest works. This riveted aluminium and fiberglass chaise longue fetched 2,434,500 during an auction in 2015, making it the most expensive object sold by a living designer. 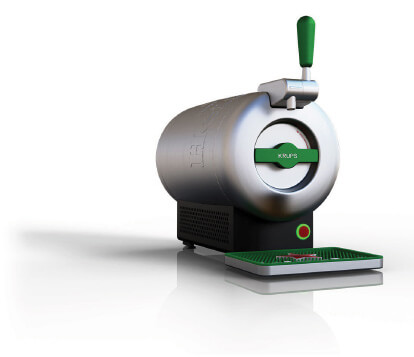 3 In homage to his love for beer, Newson collaborated with Dutch brewing company Heineken and technology company Krups to produce The Sub, a draft beer machine for use in the home.

4 Newson’s New Rolling Luggage for luxury malletier Louis Vuitton has bright orange, pink and yellow versions with minimal logos. His innovative design for the four-wheeled bags — which come in mini, cabin and maxi sizes — have made them lighter and more spacious.

5 The limited-edition Aikuchi swords have a curved, single-edged blade and a long grip to accommodate two hands. The 10 limited-edition katana swords are modelled on the traditional weapons used by Japanese samurai warriors.