Malaysia Airports Holdings Bhd
(Jan 13, RM5.70)
Maintain buy with a target price (TP) of RM6.35: Passenger traffic at Malaysian airports decreased 2.7% year-on-year (y-o-y) in December 2015, mainly due to capacity cuts by Malaysia Airlines Bhd (Malaysia Airlines). This has yet to be fully replaced by other airlines, given the short time frame. Recall that Malaysia Airlines, which has a 33% market share of Malaysia’s air travel traffic, had both cut its capacity and discontinued various services in restructuring its business. We believe that the declines are temporary as historically, other airlines have responded by adding the withdrawn capacity within a few months.

For 2016, management has targeted a lower 2.5% growth target, while we are slightly more optimistic forecasting 3% growth. We maintain our “buy” call on MAHB with a TP of RM6.35. Our call is premised on earnings rebound in third quarter ended Sept 30, 2015 (3QFY15) likely to continue in 4QFY15, better contributions from ISG, which has turned a profit albeit being partially offset by fair value amortisations of concession rights, which are non-cash; cost-cutting initiatives implemented in Malaysian airports to keep operating costs in check. Our valuation is based on a discounted cash flow method (weighted average cost of capital: 7.7%, Beta: 1.1). — MIDF Research, Jan 13 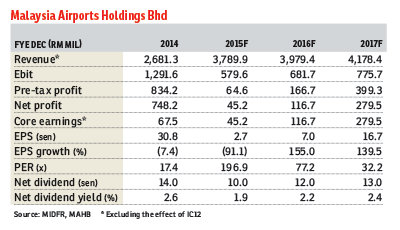