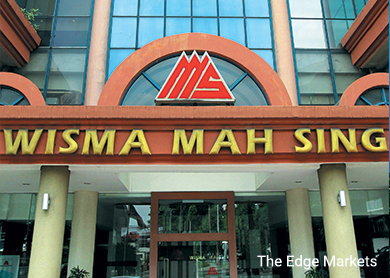 Mah Sing Group Bhd
(June 10, RM1.74)
Maintain buy with lower fair value of RM2.38: With an enlarged share base of 2.4 billion shares, we believe the bonus issue (one-for-four) would help improve the stock’s liquidity, while the new warrants (about 166 million with an exercise price of RM2.10 per share; expiring in 2020) provide another avenue for long-term funding.

The bonus and warrants issue comes after Mah Sing successfully raised approximately RM1.2 billion in the form of a rights issue and perpetual sukuk. This should be more than sufficient to meet its estimated land commitments of RM1.1 billion over the next two years.

Out of the RM630 million raised from the rights issue, RM370 million has been earmarked as part payment for the purchase of land in Puchong and Seremban. Another RM160 million has been allocated for future land banking or development activities. 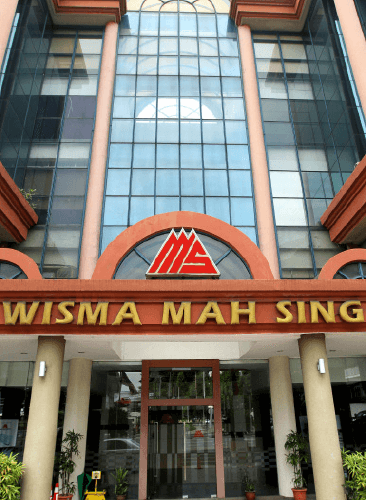 At the same time, the move frees up cash flow and enables the group to capitalise on any value-accretive land banking deals. As at end-March 2015, it is in a comfortable net cash position of approximately RM280 million.

Mah Sing’s earnings visibility remains, given its healthy unbilled sales pipeline of RM5.1 billion or approximately two times its financial year ended December 2014 (FY14) property revenue. In addition, we expect the group to be well-positioned to ride on any resurgence in property presales, as it expects buying momentum to normalise by the second half (2H) of FY15 after the implementation of the goods and services tax on April 1.

Mah Sing’s realignment of its product mix favouring affordable homes — 84% below RM1 million and 44% below RM500,000 — in good locations, will help sustain its sales momentum.

For the full year, the group has maintained its new sales target of RM3.4 billion (first quarter: RM761 million).

We continue to rate Mah Sing as our top large-cap pick for any recovery in the property sector. The stock is trading at a deep 38% discount to its net asset value. This is backed by a robust gross development value pipeline of RM44 billion.

A potential wild card is its 1,051-acre (425.32ha) land bank in Seremban (implied land cost: RM8.50 per sq ft), which should benefit from the government’s plans to develop the 108,000ha Malaysia Vision Valley as mooted under the 11th Malaysia Plan. — AmResearch, June 10 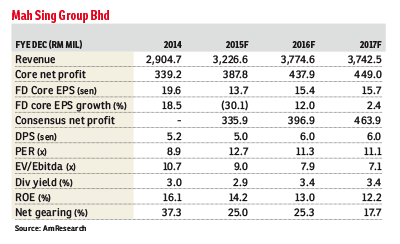