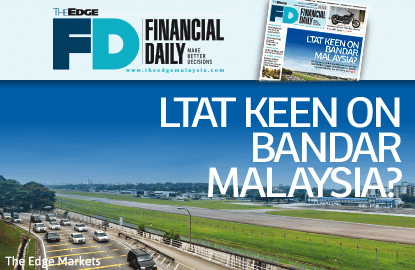 KUALA LUMPUR: Lembaga Tabung Angkatan Tentera (LTAT) is said to be keen on taking part in 1Malaysia Development Bhd’s (1MDB) multibillion-ringgit Bandar Malaysia development, according to sources familiar with the project.
“There is no decision yet on those shortlisted for the development, but LTAT will be involved,” said one source.
It was not known at press time the role that the Armed Forces Fund would play in the development of Bandar Malaysia, where the former Sungai Besi airbase was previously located.

CH Williams Talhar and Wong Sdn Bhd (WTW), the transaction adviser for the Bandar Malaysia request for proposal, announced earlier this month that four preferred bidders were shortlisted from 12 proposals submitted for the development of Bandar Malaysia. The submission closed on Aug 28.

It is said that a Chinese-based company is among the four shortlisted bidders for the mega development, which will be home to the Kuala Lumpur-Singapore high-speed rail terminus, as well as the mass rapid transit Line 2 and Line 3.

According to WTW’s statement, the shortlist would be presented to 1MDB’s board for approval. The four bidders would then undergo a detailed due diligence, clarification and negotiation process with 1MDB Real Estate Sdn Bhd and WTW before a final recommendation is made to the investment fund’s board.

1MDB Real Estate is a wholly-owned unit of 1MDB, which takes charge of the development.

When contacted, WTW deputy managing director Danny Yeo said: “[It is an] ongoing process of clarifications with the four final shorlisted bidders. Further decision will only be known in November.”

He declined to furnish further details.

The city’s airbase was shut down in November 2011 and all aircraft operations are being relocated in several parts of the country to make way for the Bandar Malaysia project.

1MDB is the master developer of the prime tract, measuring 486 acres (196.68ha), which is less than 15 minutes away from the Tun Razak Exchange — another large development by the strategic investment fund.

The project has attracted some 40 interested investors including government-linked companies, local developers and foreign state investment corporations for the expression of interest.

Capability to raise funds is one of the requirements that bidders need to have, among others — for instance, strong brand names and track records — to participate in the project.

The commercialisation of Bandar Malaysia was part of a rationalisation plan, which was presented to the Cabinet, to revive cash-strapped 1MDB’s financial position.