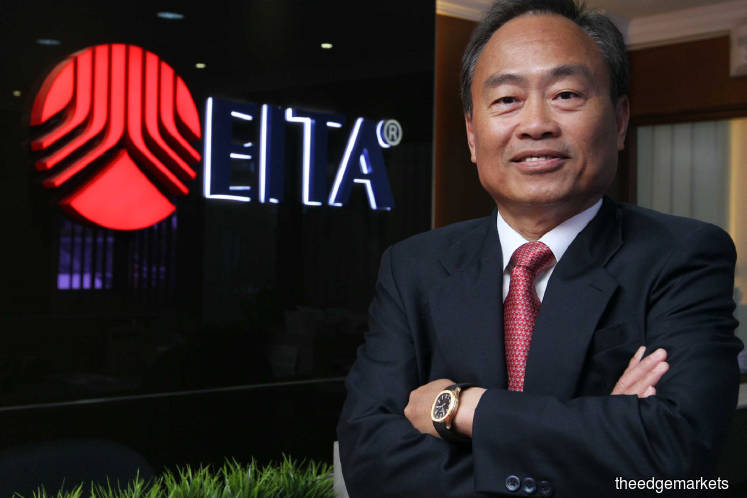 ELEVATOR manufacturer EITA Resources Bhd has continued to see growth in its business despite a near two-thirds cut in the original contract value of the Light Rail Transit Line 3 (LRT3) project due to the government’s strained fiscal position, says group managing director Fu Wing Hoong.

The reduction has had “no impact” on the company and “business is as usual”, he continues, shrugging off concerns.

Fu expects EITA to see an increase in earnings for the financial year ended Sept 30, 2019 (FY2019), “and even for FY2020, which will be driven by the elevator business and power substation jobs”. He reveals that the company’s order book increased to RM707.34 million as at June 30 from RM484.75 million the year before.

However, after taking into account the revised LRT3 contract with a RM127.62 million reduction, EITA’s order book is closer to RM579.72 million, which Fu says is still sufficient to keep the company busy for at least the next two years.

Moreover, the order book is “not reflective” of EITA’s sales as it excludes the other half of the company’s business due to the jobs’ brief execution period, he explains.

Nearly half the company’s total revenue is derived from the manufacture of elevators while 46% is from substation transmission and the rest from bus duct manufacturing and extra low voltage (ELV) services.

Orders yet to be included are those from bus duct manufacturing and lift service maintenance.

In addition, EITA has only announced to Bursa Malaysia projects that are valued at more than 10% of its revenue, Fu points out.

Based on its FY2018 revenue of RM263.38 million, contracts worth less than RM26.34 million would not rate a mention on the exchange — for instance, the Bukit Bintang City Centre (BBCC) job it landed is worth some RM20 million, which is below the threshold.

Fu expects EITA’s profit margins to hold steady. For the cumulative nine months ended June 30, it posted a net profit of RM14.98 million — 3.77% lower than the RM15.57 million it reported in the previous corresponding period. Revenue was flattish at about RM200 million.

While the company’s substation earnings have been growing steadily, “lifts are still the focus”, Fu asserts, describing the segment as “EITA’s future” given the potential to “modernise lifts”.

He believes there are easily 80,000 elevators in Malaysia, but EITA only maintains “a few thousands of them”.

“As the market matures and with fewer new buildings, people may tear down old buildings or modernise existing ones, thus new lifts would be needed. So, these are the potential areas we are looking at,” says Fu.

Apart from manufacturing lifts, EITA also services and maintains them, which provide recurring income — and is a cash cow — for the company.

From its inception to July this year, the company had handed over 3,437 lifts — and as at September, was maintaining 2,979 units.

In acknowledging the market’s general preference for foreign brands, Fu says, “We will continue to build our image and strengthen our quality to get market acceptance.”

Still, he is positive about EITA’s prospects as it will be delivering the Mass Rapid Transit Line 2 and LRT3 jobs over the next two years.

That both the East Coast Rail Link and Kuala Lumpur-Singapore high-speed rail projects have been approved has led to anticipation that jobs will be farmed out next year, even though contract values would be less “exciting” due to the reduction in work scope.

In the substation business, EITA is still on a learning curve but it continues to be a “segment of interest”, says Fu. “We have gained confidence as the delivery has been smooth sailing so far. But this segment is not our focus … at least for the next few years.”

For the nine months ended June 30, the substation segment accounted for RM31.57 million of group revenue. Its contribution amounted to RM33.92 million in FY2018 and RM13.12 million in FY2017.

In the long run, EITA is looking to expand its presence in Asean and the Middle East while exploring new markets, reveals Fu.

Exports contribute about 20% to group revenue and it is targeting to increase this to 50%.

EITA has more than 160 dealers and wholesalers in Malaysia, 30 agents and distributors in Asean and the Middle East, and 50 sales and marketing employees.

Over the past year, EITA’s share price has gained 13.5% to its close of RM1.40 last Thursday, valuing the company at RM182 million.

Currently, only CGS-CIMB Research covers the stock. Its “buy” call and target price of RM2 indicate a further headroom of 42% for the stock.

A quick check on Bloomberg shows that EITA has an indicated dividend yield of 4.35%, which appears to be reasonably attractive for investors looking for dividend-paying companies. The group has consistently paid dividends that exceed its dividend policy of 30% of group profit after tax.

“We tend not to reduce dividend payments,” says Fu, in what could be a hint that EITA is likely to continue paying stable dividends in the years ahead.

In the most recent quarter, EITA declared a three sen interim dividend for FY2019, which was paid on Sept 27.

Dividend payments aside, Fu says the company wants to grow its cash to ensure that it has enough funds for expansion while maximising returns to shareholders.

With a healthy balance sheet and ample cash, he reveals that EITA has been identifying potential acquisitions that provide synergy.

“We want to acquire but will be very selective. We are not just attracted by margins — though if the margins can’t grow, we wouldn’t want to buy. We want to make sure that it is a good growth industry and not a sunset industry.”