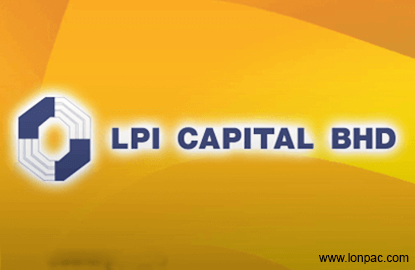 LPI Capital Bhd
(April 8, RM15.72)
Maintain underperform with target price (TP) of RM14.20: LPI Capital Bhd reported a net profit (NP) of RM65.4 million in the first financial quarter ended Mar 31, 2016 (1QFY16), which made up 24% of our and consensus full-year estimates. As expected, no dividend was declared under the quarter reviewed.

Year-on-year, 1QFY16 revenue increased by 10%, driven by the higher gross earned premium (+11%) in the general insurance segment. Meanwhile, improvement in other income (+12%), which was mainly boosted by better commission income (+13%), also partly contributed to the growth. Earnings before interest and tax improved by a wider quantum of 15.4%, underpinned by a lower claims incurred ratio of 43.1% (-6 percentage points [ppts]) despite a higher commission expense ratio of 21% (+2.2 ppts) and a higher management expense ratio (+6 ppts).

Quarter-on-quarter, 1QFY16 NP declined by 36% on a retracement of net earned premiums (-22%) coupled with the high earnings base in 4QFY15, which was boosted by the realised capital gains of RM36.9 million from Public Bank Bhd shares sale. Looking at the key ratios, the claims incurred ratio and combined ratio were higher with both dragged by lower net earned premiums. Meanwhile, the retention ratio was lower at 53.6% (-7.5 ppts).

Post results, we raised our TP to RM14.20 from RM13.66 as we rolled over our valuation base year from FY16 to FY17. This is based on an unchanged blended FY17 price-earnings ratio (PER)/price-to-book value (P/BV) of 17 times/2.5 times (both based on LPI’s average five-year PER and P/BV). — Kenanga Research, Apr 8 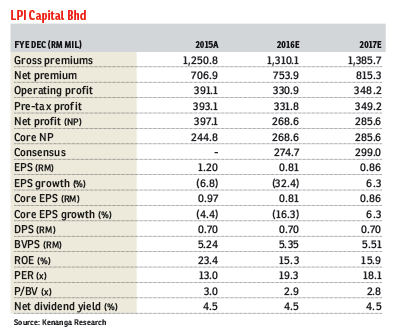