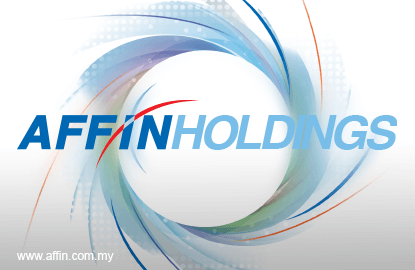 In a filing with Bursa Malaysia today, the financial institution said the better net profit in the quarter also came from a higher profit share from its associate and an increase in both net interest income and Islamic banking income.

Affin’s Islamic banking income grew at a bigger pace of 7.2% year-on-year to RM58.93 million, from RM54.97 million a year earlier.

Its 1QFY16 income statement showed that it made a write-back of RM1.58 million of impairment losses on loans, advances, and financing. In the previous year, it had made a provision of RM124.12 million, which put a major blow to its bottom line.

In a separate statement, Affin said it achieved an annualised loan growth rate of 3% during 1QFY16, mainly in the segments of syndicated term loans, business term loans, housing loans and hire purchase loans.

Customers’ loan-to-deposit ratio was stable at 88.4% as at March 31, 2016, it said. Consumer deposits-to-total deposits ratio was 26.7% for the quarter under review.

However, Affin’s loan loss coverage ratio including the regulatory reserves fell to 93.6% as at the end of March 2016, from 98.1% just three months earlier.

Its gross impaired loans ratio also ticked up by eight basis points from the end of December to 1.98% in Mar 31 this year.

“As at March 31, 2016, the Total Capital ratio, Common Equity Tier-1 Capital ratio and Tier 1 Capital ratio of all banking entities within the group were healthy and well above regulatory requirements in line with Bank Negara Malaysia's Capital Adequacy Framework, a reflection of Affin’s financial strength,” it said in the statement.

“For the current quarter under review, the fee income continues to dominate, while improvements in operating expenditure was negated by a drop in initial service charges from the asset management business.”

Its 34.5% associate AXA AFFIN General Insurance Bhd (AAGI) made a pre-tax profit of RM35.7 million in the quarter under review, up more than 71% from last year’s RM20.8 million, primarily due to higher earned premium as a consequence of growth in the health and motor businesses and higher investment income.

Going forward, Affin said its commercial banking business will focus on both retail and business segments in order to pursue the opportunities available in the domestic economy, “which despite the softer economic growth outlook, still holds the prospects for business growth.”

“At the same time, our loan portfolio will be proactively managed,” it added.

“We look forward to continue improving on the delivery of our products and services with a focus on transactional banking, in line with our efforts to establish our presence within the ASEAN region and beyond,

“We will also be exploring potential business prospects within the LTAT/Boustead group, in order to capitalise on the synergies that we will be able to achieve through these collaborations,” Affin said.

Given the prevailing soft and restricted capital markets, Affin said it remains cautiously optimistic of the growth prospects for its investment banking business for the rest of 2016. It plans to work closely within the banking group and its regional partners, Daiwa Securities Group and Thanachart Securities, to further develop business prospects and realise potential synergies.

It is positive on its life insurance business, citing favourable demographics and relatively low insurance penetration.