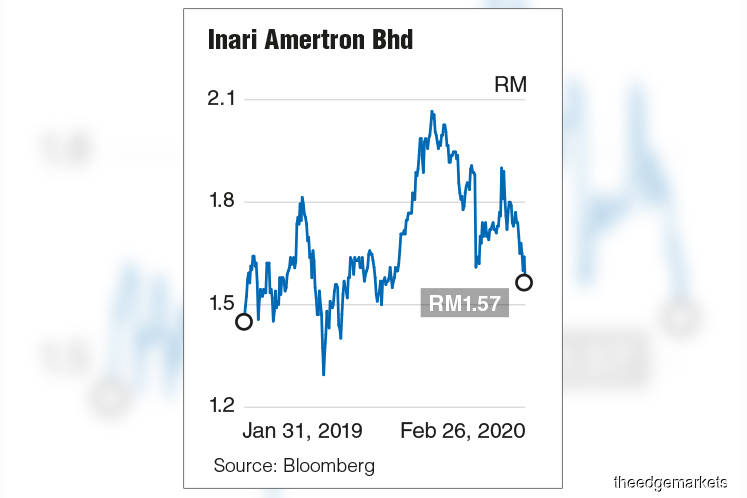 The counter tumbled to a low of RM1.54 before paring losses to close at RM1.57, some 4.27% or seven sen lower. The last time the counter traded at this level was in August 2019. At current price, Inari’s market capitalisation is RM5.09 billion.

Trading of Inari shares was heavier than usual with 38.64 million shares changing hands, some three times more than its 200-day average trading volume of 12.23 million.

TA Securities Research’s Wilson Loo downgraded the stock from “buy” to “sell”, owing to “the stock’s unfavourable risk-reward potential”, and cut his target price (TP) by 26.26% to RM1.46 from RM1.98.

“Corresponding to our earnings cut and assigning a lower PER (price-earnings ratio) multiple of 22 times (x) [previously 24x] against CY20 (calendar year 2020) EPS (earnings per share) which is line with the stock’s five-year mean, our TP for Inari is lowered to RM1.46 per share,” he said in a note.

He also slashed his earnings forecasts for FY20 to FY22 by 19% to 20% after paring his sales forecasts by 8% to 15% on account of lower-than-expected loadings and potential weakness to sales caused by the Covid-19 outbreak.

AllianceDBS Research’s Toh Woo Kim opined that Inari’s near-term share price is likely to be weak following the poor 2Q results and uncertainties stemming from the Covid-19 outbreak. That said, the stock is trading at 22.5 times FY21 PER, which Toh sees as fair since investors are pricing in a fifth-generation (5G) structural growth narrative.

“Potential rerating catalysts include higher radio frequency content gains and/or faster replacement cycle of 5G-enabled smartphones, which should emerge progressively as more data points become available in 2020. Maintain ‘hold’ recommendation with a RM1.55 TP based on 21x FY21 PER,” he said.

According to CGS-CIMB Research’s Mohd Shanaz Noor Azam, Inari and the domestic semiconductor industry in general could still benefit from a potential depreciation in the ringgit against the greenback following greater domestic political uncertainties.

Inari’s 2Q net profit fell to RM37.49 million, from RM55.09 million for the corresponding quarter a year prior, while revenue fell 11.56% to RM265 million as a result of lower sales volume in optoelectronics products.

The company declared a second interim dividend of one sen per share, taking its total year-to-date dividend payout to 2.3 sen, from 3.1 previously.

Bloomberg data shows that of the 19 analysts covering the stock, six have “buy” calls, five “hold” and eight “sell”.