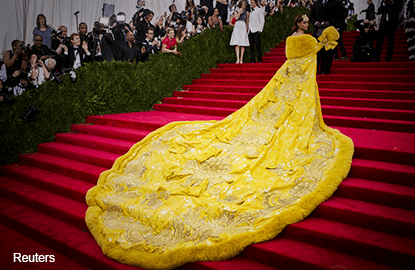 THOSE who have seen the photos of pop princess Rihanna walking down the red carpet at the Costume Institute Gala this year in New York would likely agree that the dress is not one that is easy to forget, in all its bright yellow glory with a heavily embroidered, floor-sweeping train. The handmade dress that took couturier Guo Pei two years to make not only turned heads at the event but also sparked international media coverage and interest in designer, whom Rihanna had reportedly chanced upon while researching Chinese couture online.

The China: Through the Looking Glass exhibition at the Metropolitan Museum of Art that commenced in May was extended due to the overwhelming response and earlier this month, the number of visitors to the exhibition stood at 735,000 people.

This figure makes it the most-visited Costume Institute show in the museum’s history, displacing Alexander McQueen’s Savage Beauty, which attracted 661,509 attendees and is not too far off from the museum’s biggest show in 1979 — Treasures of Tutankhamun — which attracted more than one million people.

Perhaps the response is indicative of both a fascination with oriental-themed creations as well as a trend of the fashion compass moving East, as more and more Asian designers and home-grown fashion labels rising to international fame.

One characteristic shared by the designs of these fashion creators across the region is the emphasis on being current and up-to-date with the latest trends, while not compromising on the element of individuality.

Think the eclectic and at times avant-garde style of Japanese fashion, or the incorporation of materials like songket and batik in the clothing and accessories of our local designers.

Capitalising on the power of celebrity is one way of making a mark, as few other things leave quite the same impression as a famous personality donning your creations to an event with wide media coverage.

Asian fashion designers are slowly but surely carving an identity in the world stage with ingenious ideas and a rising presence in international fashion shows. These are some emerging fashion labels that are making waves worldwide.