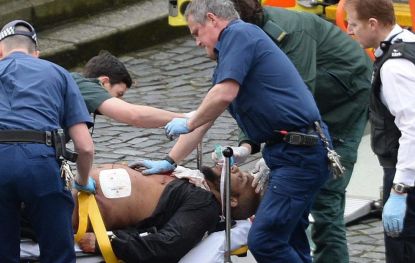 CAIRO (March 24): The "Islamic State soldier" who killed four people in an attack on the British parliament may have been inspired by calls to arms against the West but the militant group has given no evidence yet that he acted on specific instructions.

British-born Muslim convert Khalid Masood mowed down pedestrians in his car and stabbed a policeman to death in a high-profile killing which echoed other deadly attacks in Europe claimed by the ultra-hardline Islamists.

Almost 24 hours after the killings the group issued a brief statement calling Masood one of its soldiers. But it offered no details to suggest that Islamic State's leadership — losing ground to enemies in Syria and Iraq — knew of his plans in advance.

That in itself does not rule out coordination between Masood and militants in the shrinking, self-styled caliphate. Islamic State frequently delays releasing video footage or other material showing the planning and implementation of operations.

But the nature of Wednesday's killings, carried out by a single assailant armed only with a hire car and a knife, matched a pattern of recent attacks which require no training, military expertise or outside guidance.

Islamic State spokesman Abu Mohammed al Adnani called on sympathisers across the world to carry out exactly those kind of attacks in an appeal issued when the group was at the peak of its power in late 2014.

"If you can kill a disbelieving American or European ... smash his head with a rock, or slaughter him with a knife, or run him over with your car, or throw him down from a high place, or choke him, or poison him," said Adnani, who was killed in a US air strike in Syria last August.

British counter-terrorism police say they are still trying to establish whether Masood, a criminal with militant links, acted alone, with support or under instruction of others.

He had shown up on the periphery of previous terrorism investigations that brought him to the attention of Britain's MI5 spy agency, but the 52-year-old was not under investigation at the time of the attack.

Khaled Okasha, an Egyptian security analyst and former police officer, said Masood appeared to be the latest in a series of attackers he described as "sympathetic and loyal from afar" rather than central figures in Islamic State.

Those assailants are inspired by Islamic State's online campaigns, Okasha said, and often leave behind the Islamic State materials from which they drew their inspiration.

"So the operation has an Islamic State signature on it, and straight after the operation ... the Daesh (Islamic State) leadership in Syria put out a statement claiming responsibility" even though they may have had no advance knowledge, he said.

A French judicial source said last month that an Egyptian man who attacked soldiers with machetes at the Louvre museum in Paris told police he identified with the beliefs of Islamic State but had not received instructions from - or sworn allegiance to - the group.

That type of "lone wolf" attack contrasts with the November 2015 suicide assaults on Paris and bombings at Brussels airport and the metro four months later — waves of coordinated killings carried out by Syrian-trained militant cells.

Rita Katz, founder of the intelligence firm SITE which monitors Islamist militants, said there was no evidence yet that Masood had been in direct contact with Islamic State.

Shortly after the attack, Katz tweeted that some Islamic State supporters were celebrating. "However, unlike #Paris & #Brussels, no organised media campaign from #ISIS yet which may suggest no coordination w ISIS , if linked at all".

That may in part reflect the reduced activities of Islamic State and its sympathisers on social media — a decline which coincides with its territorial losses in Iraq and Syria.

The group's presence on Telegram, a social media network that had become its main platform for announcements and speeches, has tapered off recently.

The US-led anti-Islamic State coalition estimates that its activity on Twitter has fallen by 45 percent since 2014, with 360,000 of the group's Twitter accounts suspended so far and new ones usually shut down within two days.

But even on the group's own media there has been little fanfare for an attack which struck at the heart of one of its main international enemies.

Friday's daily news broadcast on Islamic State's Albayan Radio, which carried reports of fighting in Mosul, Aleppo and the Egyptian Sinai peninsula, made no mention of the London attack or the group's claim of responsibility.