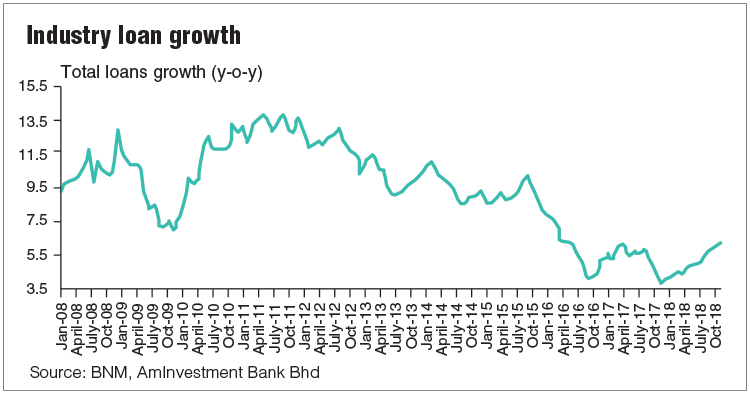 KUALA LUMPUR: As the global economy manifests signs of a slowdown, analysts project that local banks’ loan growth would also moderate in 2019 despite having shown positive momentum last year.

The latest banking data of up to November 2018 showed that total loans in the system grew 6.2% year-on-year (y-o-y) supported by a stronger momentum in non-household loans, while the growth in household loans moderated slightly. Overall, the growth beat expectations, and was the eighth consecutive month of loan growth acceleration.

Accelerating this growth, however, was mainly because of working capital loans, said MIDF Research, with such loans growing 6.2% y-o-y to RM390.1 billion, higher than the recorded 5.5% y-o-y growth to RM388.7 billion in October.

“We believe that this follows from some clarity in the government’s policy direction following the tabling of mid-term review of the 11th Malaysia Plan and Budget 2019.

Demand, however, decelerated as loans applied for in November fell 24.3% y-o-y, with working capital loan applications down 35.1% y-o-y to RM13.1 billion, while residential mortgage applications retreated 10.8% y-o-y to RM19 billion.

On the other hand, deposits rose 6.5% y-o-y, mainly driven by products such as fixed, foreign currency and money market deposits, though current account savings account grew 3.2%.

“Considering LDR is hovering close to its 10-year high, we think deposits competition could continue into 2019. That said, the rivalry should not be too intense to avoid excessive negative carry from idle deposits,” Hong Leong Investment Bank analyst Chan Jit Hoong wrote in a note recently.

And the industry’s gross impaired loans (GILs) have remained stable at 1.49%, marking the lowest level on record.

“GILs for all segments remained stable with no significant upticks to indicate any signs of stress on asset quality,” said AmInvestment Bank analyst Kelvin Ong.

But looking ahead, there seems to be no strong catalyst to drive loan growth, say analysts, who believe that although the numbers have been on an uptrend and would likely end well in 2018, the year ahead may not enjoy the same growth momentum.

“This [November growth] surpassed our 2018 expectation of 4.5% to 5% and with only one month left, we believe it will settle at 5% to 5.5% [for the full year]. That said, we still see 2019’s loan growth tapering to 4.5% to 5% given the lack of strong positive leads in both the household and business segments,” said Chan.

Ong added that loan growth, in particular for the manufacturing sector, is also likely to moderate ahead due to the slowdown in global trade activity as a result of the US-China trade spat.

Imran, who expects 2018’s total loan growth number to exceed MIDF’s estimate of 5.5% given the strong loan growth momentum seen up to November last year, is also expecting loan growth to moderate in 2019 to 4.7% due to a high base effect.

“Overall, we are cautiously optimistic about the banking sector continuing its solid performance in 2019. We believe the banking sector will be able to maintain its earnings potential given continued loan growth and stable asset quality,” said Imran, which he added means there will be accretion in value for banks’ book value, he said.