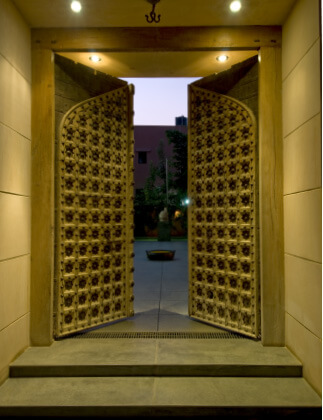 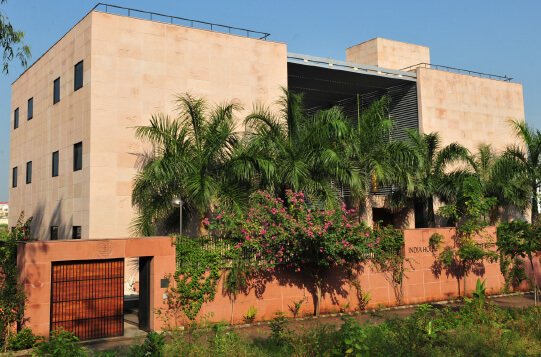 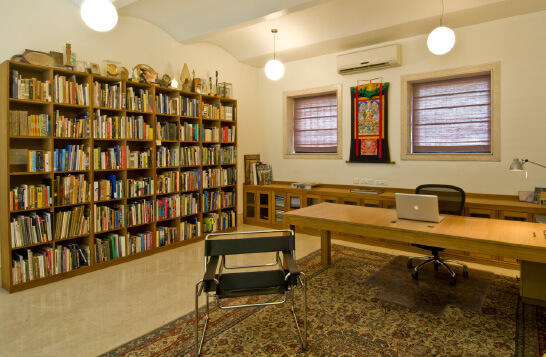 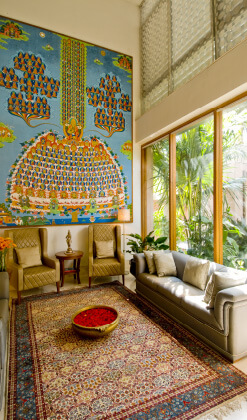 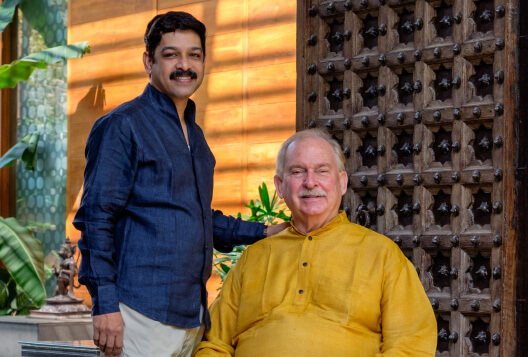 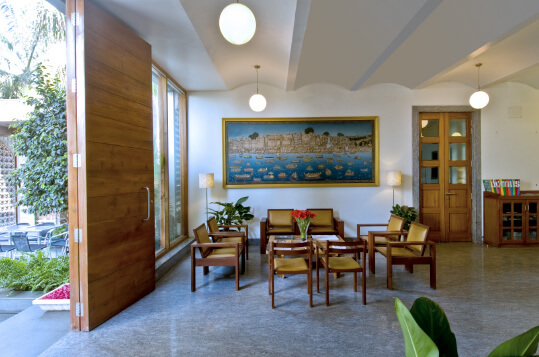 The lobby area which links the house to the courtyard 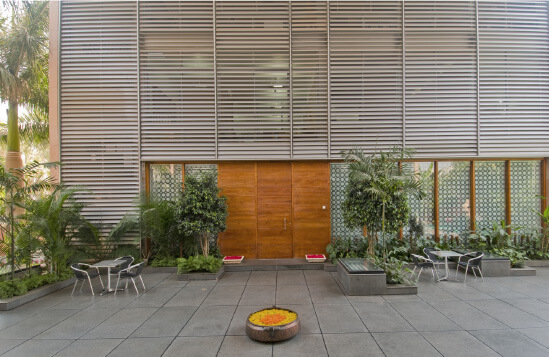 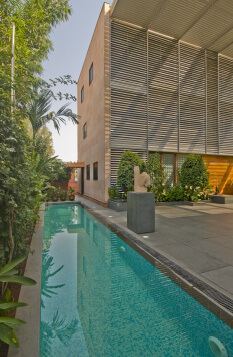 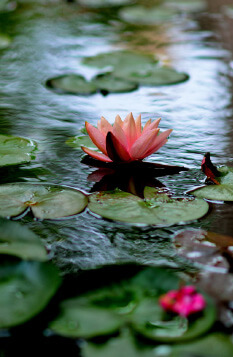 Lotus ponds are ideal for moments of quiet reflection 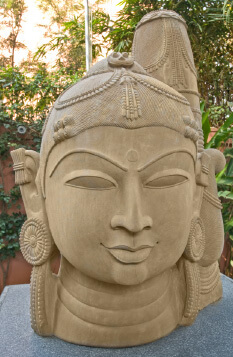 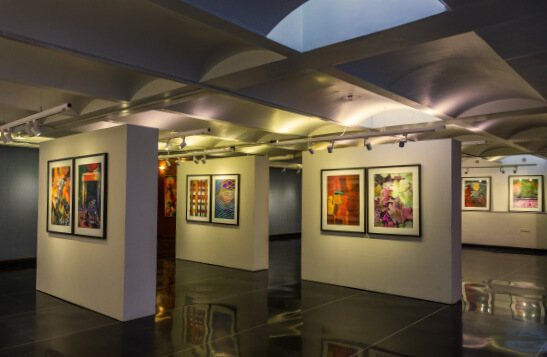 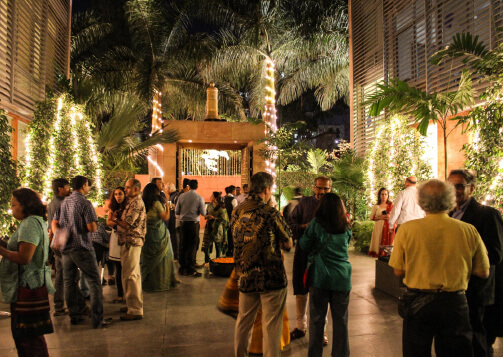 The atrium courtyard serves as a plaza for music, dance and discourse

For eminent architect Professor Christopher Benninger and Ramprasad Akkisetti, curator and founder of the India House art gallery, home is where work-life balance can truly be found

Drawing inspiration from the celebrated havelis, those marvellous traditional mansions of the subcontinent, India House is an art gallery, the architect’s own residence, studio, guest house and all-out glorious living space. Founded by curator Ramprasad Akkisetti and designed by Professor Christopher Benninger, India House sits on a 1,000 sq m plot in Pune, a city much favoured for its hilly terrain and salubrious climate. “We chose Pune for its strong historical role in the evolution of modern India,” the creative duo say. “It is also an emerging industrial and educational metropolis with growing universities and research hubs.”

Benninger and Ramprasad christened their sprawling haven the rather official-sounding “India House” to manifest the country’s rich culture, inclusiveness, religions, races, ethical systems and geo-climatic regions with unique histories. “We wanted to reflect this integrated complexity in both the name and within the materiality of this complex,” they say.

And, indeed, a quick glance at the structure and surrounds more than reflect this eloquent ethos. Everywhere you look, there are murals on cool stone walls to delight the eye. Statues, paintings and precious artifacts vie for attention from strategic points. Lotus pools, ideal for quiet reflective moments, abound and intricate copper Himalayan Buddhist prayer wheels are embedded on one long wall.

“Adventure is part of my spirit,” says Benninger. “In the late 1970s, I ventured into Bhutan and explored a great deal of the country. Over the following decades, I maintained studios there, preparing the capital plan for the city of Thimphu and also designed the Supreme Court of Bhutan, the National Ceremonial Plaza and the United Nations House, and prepared the design of a new town. Thus, the prayer wheel, large thangkas and other Himalayan artifacts around India House are echoes of that long association.”

A sandstone façade, designed to minimise noise pollution from the main arterial road, is also embossed with 78 hand-carved emblems of all religions and beliefs. “Religious orders and philosophers across the world were the first people to patronise the arts and architecture,” Benninger muses. “There is an indelible relationship between the evolution of spiritual systems, art, architecture and culture. We are not espousing religion but rather recognising spiritual paths as conduits to self-realisation.” And, just like the havelis of old, which are composed of a main entrance and welcoming courtyard and are inward-oriented, India House comprises three equal-sized volumes, with the middle one left open as the atrium courtyard to admit sunlight and breeze and serve as a plaza for music, dance or discourse. There is also a sequence of forecourts punctuated by rescued palm trees while lotus pools serve to control climate, security and privacy. “Reflection ponds, often in the form of lotus pools, do cool the air blowing over them … onto the central court. We also have a lap pool on the other end of the central courtyard to reflect intriguing ripples in the night.”

“The courtyard,” continues Benninger, “also symbolises the spirit of people coming together … being civil while innovating forms of interaction, mutual respect and creation.” Visitors to India House cannot help but notice interesting adjustable louvres made from aluminium — Benninger’s contemporary tribute to the ancient heritage of jalis. Those familiar with the intricate stone or wooden latticed screens would know their place in Indian architectural heritage where, besides being a beautiful means by which heat and light may be tempered, they also served a practical purpose, allowing the women of the zenana (traditional women’s quarters), in times when purdah was still enforced, to observe happenings at court or at home without exposing their faces.

India House’s front promenade leads to a sandstone “portal” that frames a 17th-century Moghul wooden door leading to an atrium where a statue of Shiva Nataraja, depicted in his role as the Lord of the Dance, takes precedence. “Such doors,” says Benninger, “are not only to protect the home but to signify sanctity. Upon passing through, people’s moods change; their behaviour becomes more circumspect and honour the place they are visiting.”

Inside, a treasury of artworks, most commissioned and created especially for particular spaces within the complex, abound. With regards to the Shiva statue, Benninger points that it is of particular significance to them as it was conceived from images Ramprasad captured photographically from the Thanjavur Palace art collection of Nataraja statues. “The concept was then further evolved by taking the best features from several of these classic Nataraja icons. Ramprasad then worked closely with traditional craftsmen from Swami Malai in Tamil Nadu over many months, employing the ‘lost wax’ method.” This is said to be a particularly complex process involving the creation of a hard wax statue refined to the exact desired form, which is then entombed into a hard clay jacket into which molten bronze is poured, melting the hard wax and filling the voids created. The statue finally emerges when the clay jacket is removed and is only then carved into its final detailed form.

India House’s dining area, meanwhile, is a study of artistic contrasts — the glorious result of Ramprasad’s aesthetic eye and philosophy. As Benninger explains, “My partner Ramprasad is an avid collector, specialising in vernacular Indian art, such as the Thanjavur traditional paintings in our dining room.” This vivid style of painting is said to have emerged out of the Vijayanagara Rayas’ intense desire to encourage traditional art while under threat of invasion from alien cultures. This art form then matured in the Maratha Court of Thanjavur in the 17th and 18th centuries. Other prominent artworks in our dining room are portraits by the famous artist Alberto Galvez from Valencia, Spain. “We were invited by the government of Spain to lecture there and fate introduced us to these wonderful works of art. Thus, east greets west, peering at one another from across the dining table.”

The main gallery, spanning 5,000 sq ft, is located on a subterranean level, following the traditional practice of having a kota or “storage area” under the building. “In India House, it is within a podium that is raised up a metre or so, allowing for small windows. So our collection of paintings, drawings and etchings are kept securely in our kota. There are skylights looking down into the kota from the courtyard to give light and may be opened to allow fresh air to circulate,” expounds Benninger. “Ultimately, we want India House to allow the people who live and work here to be able to be reflective, thoughtful and pensive about their own natures and their relationship with the environment, their culture and to be inspired to know what makes them unique, from where they can go on to make their own unique contributions to the world.”