L&G plans to launch three projects in the Klang Valley worth RM4.2b next year 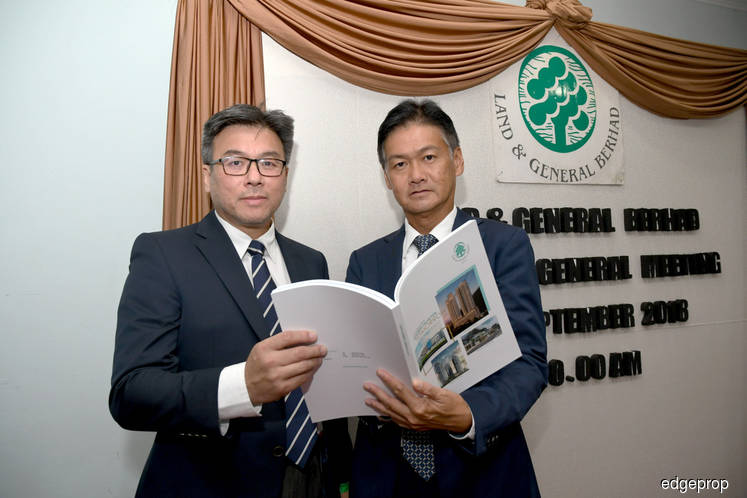 PETALING JAYA (Sept 12): Land & General Bhd (L&G) aims to roll out three projects with an estimated GDV of RM4.2 billion next year in the Klang Valley.

L&G managing director Low Gay Teck said these projects are Aria Rimba at U10, Shah Alam, a serviced apartment project at The Mines Resort in Seri Kembangan and a high-rise residential development in Bandar Sri Damansara.

“We plan to launch these projects starting mid-2019. The first will be the 120-acre Aria Rimba township developments with residential and commercial offerings,” he told reporters after the company’s annual general meeting today.

The leasehold township development in Shah Alam, which carries a GDV of RM1.1 billion, comprises terraced homes, semi-dees, Rumah Selangorku and commercial developments and will be developed in four to five phases over the next five to six years.

Besides this, L&G also plans to launch a serviced apartment project in The Mines Resort, which is located close to the South Lake of the resort and will have an estimated GDV of RM1.6 billion.

“This leasehold development will have 2,222-unit serviced apartment housed in six blocks. This project is now pending for authority’s approval, we also plan to launch it next year,” he said.

Also in the pipeline is another high-rise residential development on Sri Damansara Club’s land in Bandar Sri Damansara, which carries an estimated GDV of RM1.5 billion.

However, Low did not reveal firther details of this project, he noted that this development is now in final planning stage and preparing for authority approval submission.

Seresta, which is also phase two of its Foresta serviced apartment project, will be offering 452-unit of service apartment housed in two 47-stoey towers with built-ups ranging between 1,300sq ft and 1,800sq ft.

Low said the average selling price for Seresta is RM650psf and will be officially launched in October this year.

Meanwhile, on its Sena Parc township development in Senawang, Negeri Sembilan, he noted that the phase one launched in April this year was well-received with 110 units out of 163 units of 2-storey terraced houses booked.

Sena Parc is a 220-acre township built on a freehold tract of the former Tuanku Jaafar Golf and Country Resort, which is located close to Seremban town centre.

Commenting on the recent news reports regarding foreign home ownership, Low said as the comments made by Prime Minister Tun Dr Mahathir Mohamad were targeted at developments in southern Johor, L&G’s joint venture development with Country Garden Holdings in the Klang Valley will not be affected.

“The JV project – Diamond City in Semenyih, mainly are terraced houses and landed homes which cater to local market, there isn’t many foreign buyers,” he added.

However, he did not revealed the sales number of Diamond City.

L&G owned 45% stake in Diamond City, while the remaining 55% is held by Hong Kong-listed Country Garden.

This 167-acre township development started construction in 2014, with various offerings such as super-link house, villas and apartments.