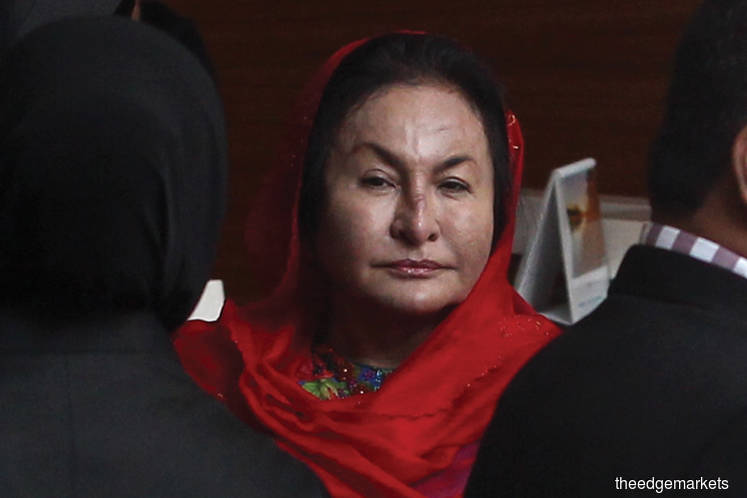 Security costs could be imposed by the court when the plaintiff or the party filing the suit is a foreigner and the defendent is concerned that the company is not able to pay costs, should it lose the suit.

Justice Wong ordered that the security costs be deposited by Oct 11 this year, failing which the suit would be struck off.

Initially, Rosmah wanted the company to pay RM500,000 in security costs to the court.

Besides this, Justice Wong also approved the appointment of a court expert on jewellery to identify whether the 44 pieces of jewellery apparently sent to Rosmah, are in police custody.

Gurupatham also indicated that it is withdrawing its application to amend the statement of claim it filed in the middle of last year.

The court's decision to appoint an expert, following the company's claim that it only identified four out of the 44 pieces of jewellery are with the police.

This is despite the police claiming it had seized almost 12,000 pieces of jewellery from several properties in the Klang Valley.

The prosecution had filed a separate RM680 million forfeiture suit against OBYU Holdings Sdn Bhd, who is the owner of an apartment where the jewellery were seized.

Following the inconsistencies and in the interests of justice, the High Court allowed Rosmah's application, according to Geethan.

It was previously reported that Global Royalty had filed the suit on June 26, demanding Rosmah return the 44 pieces of jewellery sent to her for her viewing.

In its statement of claim, Global Royalty, which is an international wholesale jewellery firm, alleged Rosmah had been its long-standing customer and that the firm would send consignments of jewellery to her on request.

The firm, which has been supplying jewellery for royalty and the rich and famous from all over the world, claimed the items not chosen would normally be returned and, in certain situations, Rosmah would borrow the jewellery and return it to the plaintiff.

The firm claimed that on Feb 10 last year, it had sent 44 pieces of jewellery, including a diamond necklace, earrings, rings, bracelets and a tiara, each worth between US$124,000 and US$925,000, to the defendant by hand, through two of its agents.

During the handover, the defendant also acknowledged and accepted the terms and conditions stated in Memorandum No. 926 relating to the items, the plaintiff said.

Global Royalty claimed that Rosmah, in a letter dated May 22 last year, also confirmed and acknowledged receiving the items, but said the items were no longer in her custody, as they had been seized and were with the Malaysian authorities.

The firm claimed that the plaintiff was the owner of the jewellery at all material times, and that the ownership had never been transferred to Rosmah.