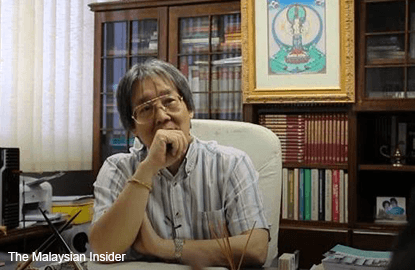 (Oct 9): Lawyer Matthias Chang, who is now being held by police under the Security Offences (Special Measures) Act (Sosma) 2012 beginning today, will challenge his detention in court, said his lawyer Haniff Khatri.

Haniff said an application would be made for the matter to be heard on the same date with Chang's client, Datuk Seri Khairuddin Abu Hassan, who is also being held under the anti-terrorism law that allows preventive detention for 28 days.

Khairuddin, a former Umno man, is being detained for lodging reports with investigators in several countries against state investor 1Malaysia Development Berhad (1MDB)

"Yes, we are preparing the documentation, we shall get the affidavit tomorrow and file in court as early as Monday morning, when court opens.

"And we will see if we can get it fixed on the same day as Khairuddin's application (but) we wouldn't know as it depends on the discretion of the court," Haniff told reporters after meeting Chang at the Dang Wangi police headquarters in Kuala Lumpur today.

Chang is also continuing with his hunger strike, which he launched yesterday upon his arrest.

"We saw Matthias, as usual he is in high spirits and is cooperative," Haniff said.

Chang was arrested yesterday when he was at the police headquarters to visit Khairuddin.

Chang, a former political aide to Tun Dr Mahathir Mohamad, was detained under Section 124K and 124L of the Penal Code that deals with sabotage and attempting to sabotage the state respectively.

"He was cooperating with the investigations. There is no basis to use Sosma. So this is actually a misuse of Sosma.

"Twenty-eight (days) is meant for investigative detention but when you have a person who is willing to cooperate with the investigation, there is no need to detain him. In that sense, it is punitive."

On Khairuddin's challenge to his detention, lawyer Muhammad Rafique Rashid Ali said that they had not received any reply from the attorney-general.

The Kuala Lumpur High Court has set Oct 13 to hear Khairuddin's application to challenge his detention under Sosma. – The Malaysian Insider