In the second statement, two paragraphs, in which KWAP admitted that it was reviewing opportunities in TRX but that no decision has been made, were taken out.

KWAP did not explain why it decided to remove the two paragraphs.

KWAP has had dealings with 1MDB before, when it gave a RM4 billion loan to SRC International Sdn Bhd in 2011. SRC was then wholly-owned by 1MDB, but the ownership was later transferred to the Ministry of

SRC's use of the RM4 billion to buy coal mining assets in Mongolia has also come under scrutiny recently as very little information has been revealed about the deal.

KWAP is also believed to have subscribed to some 1MDB bonds. 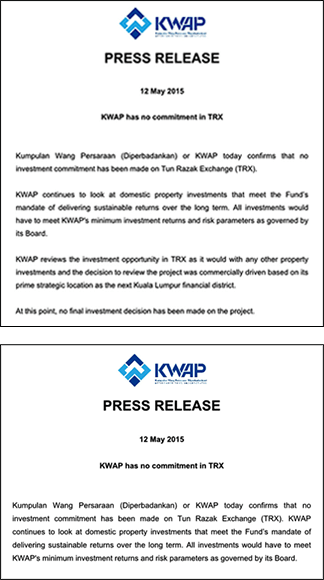