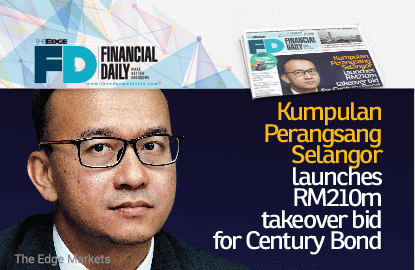 +A
This article first appeared in The Edge Financial Daily, on August 12, 2016.

KPS said it would pay RM1.75 per share in cash, representing a 2.3% premium to Century Bond’s closing share price of RM1.71 yesterday. The price means KPS could spend as much as RM210 million to purchase the Johor-based industrial packaging and contract manufacturer.

Yesterday KPS announced that its wholly-owned subsidiary Perangsang Packaging Sdn Bhd had signed a conditional share sale agreement (SSA) with CB Equities Sdn Bhd — which holds 50.55% of Century Bond’s shares — and its affiliates to acquire 85.73 million Century Bond shares or a 71.44% shareholding in the company for RM150.03 million cash.

The SSA is conditional upon Perangsang Packaging obtaining shareholder approval at a general meeting.

Perangsang Packaging will then make a mandatory general offer for the 28.56% of Century Bond that it doesn’t already own for RMRM59.97 million.

KPS expects the entire deal to close by the end of the first quarter of 2017. KPS is 57.88% owned by Kumpulan Darul Ehsan Bhd, which in turn is controlled by the Selangor state government via Menteri Besar Inc.

KPS plans to fund the proposed acquisitions via a combination of external borrowings and internal funds. It does not intend to maintain the listing status of Century Bond.

KPS believes that the takeover bid for Century Bond makes sense as it will provide the group with an additional revenue stream from Century Bond’s business and will potentially enable it to take advantage of opportunities as economic conditions improve.

However, it warned that the ongoing deterioration in the operating environment as a consequence of the drop in the value of the ringgit is expected to negatively impact Century Bond’s performance.

“Currently Century Bond supplies its cement bag products to all the biggest players in the cement industry domestically, commanding a 60% share of the market, according to a recent research report by Public Investment Bank Bhd. As the market leader in cement packaging in Malaysia as well as having a presence in Thailand, Indonesia and Singapore. it is an exciting addition to our portfolio of new businesses,” he said.

“Century Bond has shown steady financial performance with healthy margins as well as cash reserves and thus has the ability to pay out dividends. In addition, its position as market leader coupled with further growth potential regionally, integrates seamlessly with our investment strategy moving forward,” Fariz added.

Trading of the securities of both KPS and Century Bond on Bursa Malaysia was halted from 3.37pm yesterday, pending the material announcement.

The last trade price of KPS was RM1.11, giving it a market capitalisation of RM548.9 million. Century Bond shares climbed three sen or 1.79% to settle at its all-time high of RM1.71, with a market value of RM205.2 million.