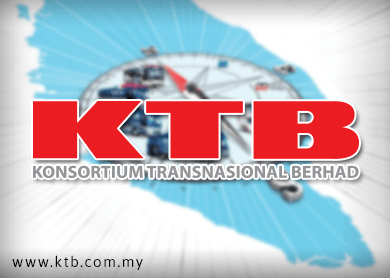 This would mean a 17 per cent rise in revenue from the  RM239.96 earned in FY13. However, Mohd Nadzmi said the numbers were not finalised yet at this juncture.

Today, Mohd Nadzmi said:"Even with this new stream of revenue (from stage bus), the group is cautious on its prospects due to the upcoming implementation of the goods and services Tax (GST) in April, as it would post a negative impact to the group's bottom line."

"The industry is highly regulated, including our bus fares, which means our operating expenses will be charged for GST, but at the same time we cannot pass the burden to the consumer, so we have to absorb it ultimately," he told reporters after Konsortium Transnasional's extraordinary general meeting (EGM) today.

As such, he said the company hoped Malaysian regulators would review inter-state express bus fares, which had not been reviewed since 2008.

FY14 stage bus revenue might have come in at RM70 million, he said.

"Stage bus represents about one quarter of our entire revenue, which could be around RM70 million for FY14.

"With the newly-awarded SBST (Stage Bus Services Transformation) contract, we will see another new stream of revenue in FY15,"  he said.

The Land Public Transport Commission has awarded the SBST contract to Konsortium Transnasional.

Under the contract, Konsortium Transnasional will provide stage-bus services in Negeri Sembilan, starting from April this year.

Konsortium Transnasional is scheduled to announce its 4QFY14 and full-year financials this month.

Today, Konsortium Transnasional shares fell one sen or 3% at 12:30pm to settle at 32 sen for a market capitalisation of RM128.9 million.

The stock has gained 12% this year, outperforming the KLCI's 3% rise.