KLCI slips below 1,600 as external headwinds continue to dampen sentiment 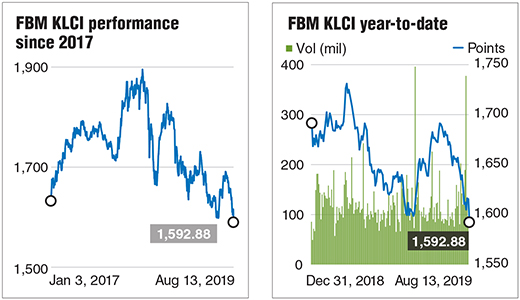 KUALA LUMPUR (Aug 13): Mirroring the performance of its regional peers, the FBM KLCI plunged 22.17 points today to fall below the crucial 1,600 level, as external headwinds continued to dampen market sentiment.

The index ended the day at 1,592.88 after slipping from the outset, as the market was in a sea of red upon resuming trading, after the extended weekend break.

TA Securities Holdings Bhd senior technical analyst Steven Soo said the yuan’s depreciation would have caused some foreign selling in the market. Last week, China let the yuan drop to its lowest level since 2008. The currency is now trading at just over seven yuan to the dollar.

“The weaker yuan has resulted in other currencies also falling. China has allowed the currency to fall to lessen the pain from the tariffs imposed from the US. It has turned into a currency war. Expect weaknesses in the market to continue,” Soo told theedgemarkets.com.

Reuters said regional shares fell as a result of being hurt by fresh jitters on the U.S.-China trade war, turmoil in Hong Kong and a firmer yen that hit cyclical sectors and exporters.

It noted US President Donald Trump had said on Friday (Aug 9) that he was not ready to make a deal with China and even called a September round of trade talks into question, reviving concerns that the dispute is unlikely to end any time soon.

In Hong Kong, continued civil unrest took a toll on the main market, which tumbled 2.10% to be the region’s worst performing index today, according to Bloomberg.