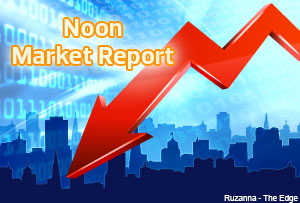 KUALA LUMPUR (Nov 4): The FBM KLCI extended its loss at the midday break on Tuesday in line with dips at most regional markets.

Regionally, Asian stocks dipped on Tuesday with latest signs of slower growth in China and the euro zone dampening the mood, although Japan bucked the trend and rose to new seven-year highs on follow-through momentum generated by the Bank of Japan's surprise stimulus move last week, according to Reuters.

The dollar took a breather following its big surge but still remained near multi-year highs against the yen and euro after the BOJ's shock move raised expectations the ECB will eventually have to adopt quantitative easing, even if not at its meeting on Thursday,it said.

She said market sentiment was also tempered by a strong dollar against the yen, along with weak crude oil price momentum.

Rosnani said the dollar had gained against the yen, currently trading at yen 113 per dollar, which admittedly would hurt the US export competitiveness apart from stoking rampant spending among Americans, driven by the strength of their currency.

She said if this prolonged, it would be another headwind for the global equity markets although it would be a boon for Japan as it would revive its export sector, a much badly needed boost for the Shinzo Abe’s administration.

Rosnani noted that crude oil had dropped below USD80 per barrel and ended yesterday’s trading at USD78 per barrel.

“If this trend persists, it will hurt the economic momentum of Russia, GCC and some African countries but will be an advantage to advanced countries economic strength like the US, China, Japan and Korea.

In addition to that, market risk-taking was contained by a host of key economic developments this week namely the eurozone policy meeting, along with Malaysia's factory output data, and the US employment report.

“Until the signals are clear, we think that sentiment will continue to be cautious,” she said.