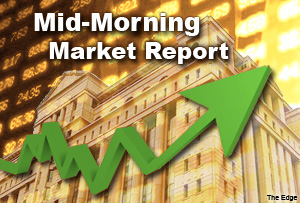 Minetech Resources Bhd was the most actively traded counter with 71.56 million shares done. The stock rose 3.12% or half a sen to 16.5 sen.

Regionally, Asian shares gave back some of their China-inspired gains on Tuesday, while oil prices slumped ahead of this week's OPEC meeting, according to Reuters.

MSCI's broadest index of Asia-Pacific shares outside Japan was off 0.3 percent after rallying in the previous session following China's surprise interest rate cut, it said.

Hong Leong IB Research said that on a technical front, the FBM KLCI could stage a follow-through technical rebound today as yesterday’s long white candlestick has broken above 10-, 30- and 50-d SMAs.