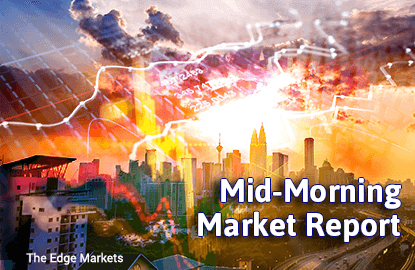 Asian stocks inched up on Wednesday, reflecting hopes that upcoming US and Japanese central bank policy meetings could benefit risk assets, while crude oil prices hovered near 2016 highs, according to Reuters.

Hong Leong IB Research (HLIB) said yesterday's sharp drop in the FBM KLCI came in out of HLIB's weekly expected range of 1,700–1,730, due to 1MDB default.

"The KLCI outlook for the remaining trading day of the week is expected to turn more cautious and choppier after a long black marubozu candlestick penetrated below psychological level of 1,700 amid falling oscillators and volume.

"Coupled with the old saying 'Sell in May and Go Away' adage, we expect the local benchmark index to trend lower toward our renewed weekly projected trading range of between 1,670 and 1,710.

"On the other hand, strong rebound in oil prices overnight could trigger a relief rally in FBM KLCI today. Hence, we are of the view that aggressive traders may play catch-up on O&G (oil and gas) counters for trading purposes," it said.