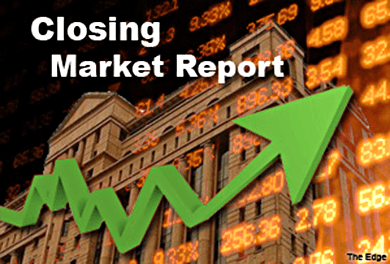 Areca Capital Sdn Bhd chief executive officer Danny Wong attributed the market’s optimism to the improvement in the US economy and a slight recovery in oil prices.

“WTI (West Texas Intermediate) is now trading at US$61 per barrel and Brent is trading at US$64 per barrel ... other external factors are there is some relief that Greece now has a plan in place for its debt problems,” Danny Wong told theedgemarkets.com.

According to Reuters, oil prices nudged higher in Asian trade today on hopes for stronger than expected US crude demand, while doubts over the prospect of reaching an agreement next week on Iran's nuclear programme eased oversupply concerns.

"US$60 a barrel is the new normal for the next several months," said Reuters in its report.

According to Bloomberg, US Federal Reserve Governor Jerome Powell said yesterday that he sees a 50-50 chance the US economy will improve enough for him to support a rate increase in September, with a second move to follow in December.

On the other hand, the ringgit continued to trade at weak levels against both the US dollar (USD) and the Singapore dollar (SGD); it was trading at 3.7513 against the USD and 2.7949 against the SGD at the time of writing.

Overall, the KLCI saw a total of 1.79 billion shares — valued at RM1.89 billion — traded during the day.

The most actively-traded stock today was KNM Group Bhd, which saw about 156.24 million shares change hands.