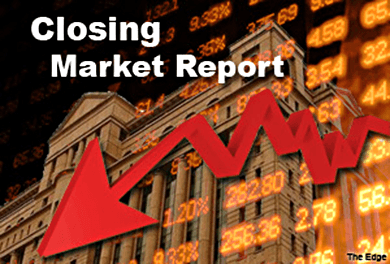 At 5pm, the KLCI fell 2.16 points or 0.12% to finish at 1,805.49 points on losses in plantation stocks like Kuala Lumpur Kepong Bhd (KLK) and Sime Darby Bhd. The shares had fallen on news Malaysian palm oil inventory had risen.

Tenaga also dragged the KLCI lower on speculation that the state-controlled utility has taken over the mandate from 1Malaysia Development Bhd to construct a 2,000 MW coal-fired power plant. The electricity generation plant is known as Jimah East.

From a broader viewpoint, a remisier told theedgemarkets.com that Bursa Malaysia was “soft” today as investors chose to take profit after last Friday’s gains.

The KLCI had risen 2.55 points last Friday. Today, the KLCI extended gains in the morning on news China had cut interest rates to support the world's second largest economy.

Reuters reported that Asian shares rose on Monday as investors cheered China's latest cut to interest rates to bolster its flagging economy and after Wall Street rallied on a robust headline reading for US employment.

In Malaysia, the remisier said: “The market (KLCI) is looking a little soft today and some of the KLCI component stocks are lower today.”

"This is most likely due to profit taking by investors after some gains last week and also portfolio reallocation activity at the start of the week,” he said.

Across Bursa Malaysia, some 1.54 billion shares valued at RM1.6 billion changed hands. There were 342 gainers versus 484 decliners.

In currency markets, the ringgit weakened to 3.6018 against the US dollar and compared to the Singapore dollar, the ringgit appreciated to 2.6987.

Reuters reported that most emerging Asian currencies eased on Monday as China's interest rate cut underscored expectations that regional peers may join easing to cope with a global economic slowdown.