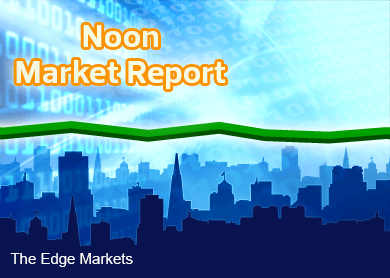 KUALA LUMPUR (June 2): The FBM KLCI dipped at the midday break today, in line with the retreat at most regional markets.

The dollar ascended to a new 12½-year peak against the yen on Tuesday, while Asian shares fell for a second day as the stronger greenback pressured commodity prices, according to Reuters.

The dollar rose as high as 124.07 yen, its loftiest peak since late 2002, before retracing to stand at 124.67 yen, down about 0.1% on the day, after a spate of mostly upbeat US data reinforced expectations that the Federal Reserve would raise interest rates this year, it said.

Hong Leong IB Research said that chart wise, the FBM KLCI might stage a technical rebound in near term following 10 consecutive black candlesticks and grossly oversold level as the index was approaching the measurement objective of Head and Shoulders near 1,720.

“Despite the potential technical rebound, current subdued trading environment could persist as investors refrain from trading commitments amid uncertainties over the near-term market direction, given the lack of fresh catalysts and nagging domestic issues.