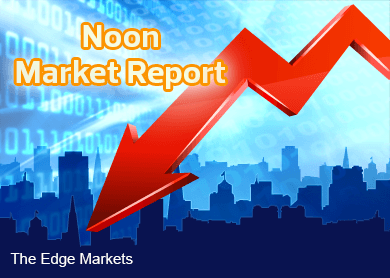 KUALA LUMPUR (Dec 3): The FBM KLCI fell 0.84% at the midday break on Wednesday, weighed by losses including at index-linked banking stocks and select blue chips.

Sentiment at the local bourse took a beating as Maybank IB Research projected a less than rosy outlook for the banking sector while AllianceDBS Research lowered its 2015 GDP forecast for Malaysia to 5% (from 5.25% earlier).

Market breadth was negative with 487 losers and 194 gainers, while 239 counters traded unchanged. Volume was 676.94 million shares valued at RM751.52 million.

IFCA MSC Bhd was the most actively traded counter with 30.14 million shares done.The stock was flat at 78 sen.

Regionally, the dollar marked a fresh seven-year high against the yen on Wednesday, which helped lift the Nikkei to a similar record, while oil prices recovered after data showed a drop in U.S. supply, according to Reuters.

MSCI's broadest index of Asia-Pacific shares outside Japan edged slightly down, while Japan's Nikkei stock average was up about 0.8 percent after earlier touching its highest level since July 2007, it said.

Maybank IB Head of Retail Research and chief chartist Lee Cheng Hooi in a note to clients said the FBM KLCI advanced 7.70 points to 1,785.97 yesterday, while the FBMEMAS and FBM100 also closed higher by 60.63 points and 60.92 points, respectively.

Lee said that in terms of market breadth, the gainer-to-loser ratio was 443-to-397 while 312 counters were unchanged, adding that a total of 2.16 billion shares were traded valued at RM2.18 billion.

“We recommend a “Sell on Rallies” stance for the index. The KLCI Dec Futures moved into a small 3.03-point premium against the FBM KLCI.

“Price rebounds remain pyrrhic in nature and still should be sold down as the FBM KLCI may be tracing out a large weekly “Head & Shoulders” pattern,” said Lee.