KESM optimistic as auto industry gears up for driverless cars 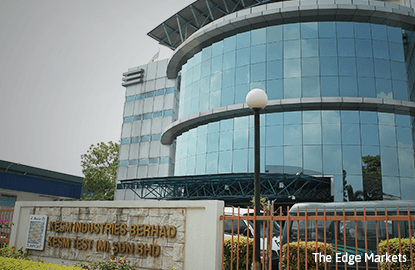 This article first appeared in The Edge Financial Daily, on January 15, 2016.

KUALA LUMPUR: KESM Industries Bhd, which saw its net profit in the first quarter ended Oct 31, 2015 (1QFY16) almost tripling to RM8.07 million, expects the global automotive industry’s move towards increasing electronic content in vehicles to drive its performance going forward, especially as the industry readies itself for the much vaunted driverless cars.

As such, it is positive on its financial performance in FY16, for which it has earmarked RM82 million — the same quantum as the year before — to expand the capacity of its integrated circuits test segment to meet the requirements of its clients from the automotive semiconductor manufacturing industry.

KESM executive director Kenneth Tan told reporters after the group’s annual general meeting yesterday that many carmakers have laid out their roadmaps to get their respective driverless car on the road in 10 to 15 years, and that KESM can leverage on that trend to grow its business further.

Tan expects the electrical content in a driverless car 15 years from now will be double that of today’s conventional car.

However, he declined to give any forecast for the company’s financial performance in FY16, though he indicated that the group’s 1QFY16, “which turned in very decently” could serve as a guidance of sorts.

KESM provides specialised electronic manufacturing activities, primarily the provision of burn-in services — the process of stressing semiconductors to weed out potentially weak circuits — with a focus on the automotive market.

Meanwhile, Tan said the capacity expansion the group is looking at this year will mainly come from the test area.

“There are test requirements that need us to continue investing in testing, in order to support our customer’s requirements. These are all customer-driven capacity requirements,” said Tan.

Meanwhile, KESM’s average capacity utilisation at its three factories — two in Malaysia and one in Tian Jin, China — is now about 80%. The Chinese market accounted for 22.33% of its total revenue in FY15, while the remainder came from Malaysia.

Tan said the group is open to any possibility of overseas expansion, provided that there was demand from its customers such as those in China.