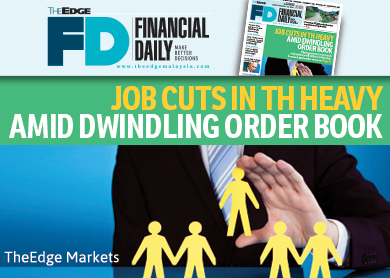 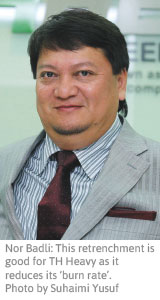 KUALA LUMPUR: TH Heavy Engineering Bhd (TH Heavy) is laying off staff in order to withstand the current strong headwinds in the oil and gas industry.

In a memo sighted by The Edge Financial Daily, the fabrication company informed selected employees that “due to the current financial situation the management has no alternative but to implement the retrenchment of redundant staff effective Dec 1”.

It is learnt that the selected employees were hired in anticipation of clinching at least one fabrication job from Petroliam Nasional Bhd (Petronas) in either the Baronia oil field or the Bergading central processing platform (CPP).

“This retrenchment is good for TH Heavy as it reduces its ‘burn rate’,” a source told The Edge Financial Daily.

In an earlier interview with The Edge weekly, TH Heavy managing director and chief executive officer Nor Badli Munawir Mohamad Alias Lafti had admitted that if the company did not bag a reasonably large fabrication job by the first quarter of next year, it could be in “serious trouble”.

As the Bergading project in the North Malay basin was awarded to South Korea’s Hyundai Heavy Industries (HHI) in May, TH Heavy’s fortune hinges on the possible US$1 billion (RM3.42 billion) award of the CPP project for the Baronia oil field off Sarawak.

However, reports from international oil and gas publications indicated that HHI is likely to be the front runner for the project, which will edge out TH Heavy and its partner McDermott International Inc.

As at Sept 30, 2014, TH Heavy had an outstanding fabrication order book of barely RM180 million and a floating production, storage and offloading (FPSO) leasing award of about US$372 million.

TH Heavy’s FPSO leasing award from JX Nippon is expected to contribute positively towards its earnings. However, it is understood that the FPSO will only start generating revenue in the later part of 2016.

The falling crude oil prices do not augur well for companies such as TH Heavy, which has failed to secure enough contracts to weather the possible slowdown in the industry. Petronas last Friday announced a cut in capital expenditure by 15% to 20%.

TH Heavy’s administration expenses shot up almost 62% to RM17.75 million in 3Q compared with RM10.98 million a year ago — an indication of higher payroll.

“Moving forward, we are cautiously optimistic but anticipate the fabrication business to remain challenging in view of the present competitive environment.

“However, the company is working towards realigning its business strategies to capitalise on more promising areas in the fabrication business and is exploring other business opportunities in the oil and gas value chain,” TH Heavy said in its results announcement.

Its operating environment has also become challenging, with the number of licensed fabricators increasing from six to eight after Petronas awarded Sarawak-based KKB Engineering Bhd and Muhibbah Engineering (M) Bhd licences in 2013.

CIMB Research recently downgraded TH Heavy to “reduce” with a target price of 43 sen after the release of its 3Q results.

“Expenses for lost contracts caused TH Heavy to post a wider net loss of RM20 million in 9MFY14, significantly below our FY14 expectations and consensus estimate.

“The fabrication of FPSO modules will start in FY15 and the Sepat CPP contract is still on offer but the fabrication outlook appears grim for certain players, including TH Heavy,” said CIMB analyst Norziana Inon.

Its share price has fallen off the cliff, tumbling from 82 sen at end-September to 40.5 sen yesterday — the lowest closing since July 2012.