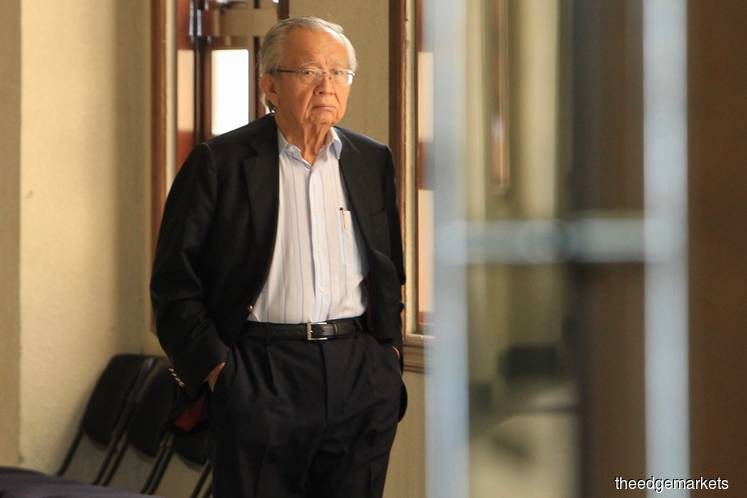 Cheah, 72, who is the 50th prosecution witness, told the court that he was given the green light by AmBank chairman Tan Sri Azman Hashim, and as a result, he went to Najib's Duta home. He was met upon arrival by Low, who is better known as Jho Low.

"Once I arrived at Najib's residence, I met with Jho Low whom I have previously met. I was then taken into the residence by Jho Low, who then introduced me to Najib, and Jho Low also informed him that I was from AmBank.

"Najib and I proceeded to the guest room while I saw Jho Low waiting at a different part of the residence," he told the court room.

Cheah also told the court that he explained to Najib the procedures to open the account and the need to follow regulations.

He added that he gave Najib the blank forms of application and witnessed the forms being signed before him in the premier's personal home.

Cheah also testified that he also informed the then-Bank Negara governor, Tan Sri Zeti Akhtar Aziz, that Najib was opening the savings and current accounts with AmBank, and she told him that she has no objections for AmBank to do so.

"[However,] she reminded that the opening of the said accounts are to be made following the banking rules and regulations," the former AmBank MD said.

The witness earlier told the court that AmBank customer relationship manager Joanna Yu had informed him that Najib had expressed interest to open savings and current accounts with AmBank.

The former MD said prior to going to the Jalan Langgak Duta house, he contacted Najib's principal private secretary Datuk Seri Azlin Alias on where and when to meet the former premier.

Cheah told the court that the AmPrivate Banking-MR code name was used for Najib's current account as Jho Low made a request to Yu for the account to be dealt with the strictest confidence.

"I only know that there were discussions to use a code name for the protection of information and to maintain sensitivity. I also subsequently informed the Bank Negara governor of this matter," he said.

The witness also told the court that AmBank's involvement with 1Malaysia Development Bhd began in 2009, when 1MDB became a corporate client of the bank.

During examination-in-chief by Deputy Public Prosecutor Datuk Suhaimi Ibrahim, Cheah also said he was appointed in Retirement Fund Inc (KWAP)'s investment panel in 2007 and recalled that KWAP approved the two loans, totaling RM4 billion, given in 2011 and 2012.

“I met Jho Low at a lunch meeting to know the person better, considering Jho Low's several dealings with AmBank previously,” he said.

The witness also admitted that the former premier told him that he wanted to open the account as he would be receiving donations from Saudi Arabia, and the witness reminded him that he would have to follow rules and regulations.

Harvinderjit then asked Cheah about his exchange of messages with Yu via Blackberry, including her feeling “relieved” at the successful “transfer out” of US$620 million from the relevant accounts.