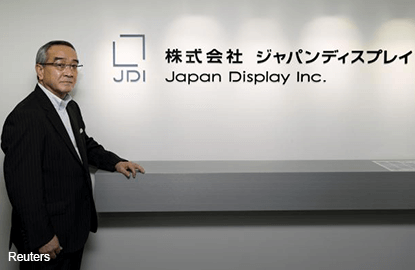 Homma said weakness in China's smartphone market, the world's biggest, amid that country's broader economic slowdown did not appear to be affecting Apple's display orders.

"They're coming to us with more orders, saying 'give us more, give us more'. They keep increasing," he told Reuters in an interview.

Apple Chief Executive Tim Cook last week reassured shareholders about the strength of the Chinese market for iPhones after a slump in China's stock market and the devaluation of the yuan rattled investors.

"I continue to believe China represents an unprecedented opportunity over the long term," Cook wrote in remarks that sparked a rebound in the U.S. giant's share price from a China-induced slump of 19% from its record high in February.

iPhone activations in China had accelerated over the past few weeks and the App Store in China had recently posted its best performance of the year, Cook said.

It is unclear whether strong orders from Apple mean the U.S. company is more bullish about the prospects of its new iPhone than previous models, or whether it is placing more orders with Japan Display at the expense of other suppliers. Japan Display does not reveal the total size of its business with Apple.

Japan Display was formed in a government-backed deal in 2012, from the ailing display units of Sony Corp, Toshiba Corp and Hitachi Ltd.

It initially struggled against Sharp Corp and other Asian rivals but it has been recovering due to strong Apple orders. In contrast, Sharp sought a US$1.9 billion bailout in May due to its shrinking display business.

Investors have speculated that Japan Display could merge with Sharp's display business to create a more stable display maker, especially since both cater to high-end smartphone makers.

Sources have said Sharp was considering selling a stake in its display business to state-controlled fund Innovation Network Corporation of Japan, which is Japan Display's top shareholder. The fund could broker a merger of the two firms, they say.

Homma said the company was not currently considering a merger with Sharp, although he did not rule out a future deal.

"We're currently in the midst of various restructuring measures. We don't have the capacity to consider such a move, and we haven't been asked to do so by our major shareholder either," he said.

"I think there might be reasons such discussions haven't come my way. But when such talks come, it will probably come suddenly."