Is it over for 6-year-old Pakatan Rakyat? 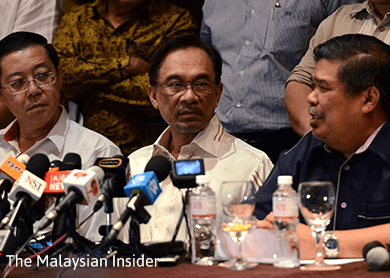 KUALA LUMPUR (Jan 27): They cannot agree to meet, they are fighting publicly over policies and some of their leaders are not on talking terms. Has Pakatan Rakyat reached the end of the road?

There are fears that Pakatan will go the way of its predecessor, Barisan Alternatif, which only survived for two years when DAP pulled out from the coalition in 2001, citing irreconcilable differences with PAS for insisting on setting up an Islamic state.

"Pakatan is dysfunctional at the moment. I don't know if it is going to be dead, it is possible," a senior Pakatan leader told The Malaysian Insider on the condition of anonymity, pointing out that Islamist  party PAS could be using the latest controversy – DAP's local council elections proposal as an excuse to break off or be sacked from the six-year-old pact.

Local council elections are the latest in a long list of issues that PAS president Datuk Seri Abdul Hadi  Awang and those aligned to him, dubbed the conservative ulama faction, seemed unhappy about.

PAS's insistence on implementing the Islamic penal code hudud at its east coast state of Kelantan via its proposed Private Members’ Bill further widened the cracks between its partners, who claimed hudud was not part of the Pakatan common policy framework.

Worst, the Pakatan leadership council where all important matters are discussed and finalised have not met for more than six months, while it had been reported that Hadi had been missing from those meetings for more than a year.

The Marang MP had previously said he skipped the meetings as he had been unwell, but that did little to quell rumours of his fraying relations with his partners.

Pakatan leaders contacted by The Malaysian Insider said it has been quite a while when the top three leaders of the party – PKR's Datuk Seri Anwar Ibrahim, Hadi and DAP veteran leader Lim Kit Siang – last sat down together.

The last Pakatan Rakyat leadership council meeting Hadi attended with Anwar and Lim was on December 20, 2013 at the Sultan Sulaiman Club in Kuala Lumpur.

It was during this meeting that the leaders decided to send a letter to Khalid to review the salaries of the assemblymen, including the MB, speaker and deputy speaker.

There have been five meetings since then which Hadi has not attended. In all those meetings, PAS was represented by its deputy president, Mohamad Sabu.

In one of those presidential council meetings last year, it was decided that Pakatan would throw their support behind Datuk Seri Dr Wan Azizah Wan Ismail for the position of Selangor MB.

Hadi was not present at that meeting but later overruled the decision of the council.

It was after that, that the DAP insisted that Hadi must be present at the council meetings.

"There is no indication at all when is the next meeting," said DAP's national publicity secretary Tony Pua.

"We will only have it if Hadi attends. That is our request, because we do not want any decisions reached to be overruled by him later," he said in an apparent reference to several decisions made by the Pakatan council during the height of the Selangor MB saga which were either ignored or overruled by Hadi.

However, PKR secretary-general Rafizi Ramli was slightly more optimistic over Pakatan's future, saying ‎that bickering was "pretty much" confined to some factions in PAS.

He said PAS's muktamar had reaffirmed its support for the coalition every year since the formation of the pact in the aftermath of the historic 2008 general election, which saw Barisan Nasional denied its customary two-thirds parliamentary majority.

This means as far as Pakatan is concerned, PAS remained committed with the pact.

"The discrepancies in the muktamar and the actions of several of its leaders have to be sorted out internally by PAS," said the Pandan MP.

The Malaysian Insider learnt that yesterday Anwar had attempted to contact Hadi and Lim for the next meeting. Lim had agreed to attend the meeting while Hadi could not be reached.

Analyst Ibrahim Suffian said a lot of the ongoing discourse was due to the upcoming PAS internal polls scheduled to take place in June.

He said what was emerging now were differences in ideologies and approaches within PAS, causing concern among its partners.

"If the conservatives are retained and influence the rank and file, it can lead to a dysfunction of Pakatan," he said, adding that on a worst-case scenario, it could lead to a total breakdown.

To avert this, the respected pollster from Merdeka Center said PAS needed to change its leadership to be more progressive and committed to Pakatan.

"PAS cannot have all it wants in terms of policies and at the same time, remain with DAP and PKR," he added.

Rafizi admitted the public wrangling had "mildly" affected grassroots, especially in seats where Hadi and his supporters hold sway.

However, at other areas with strong pro-Pakatan sentiments, the disagreements had hardly affected cooperation on the ground.

"There is some impact but not as severe as it was deemed to be. The effect is a lot milder and muted."