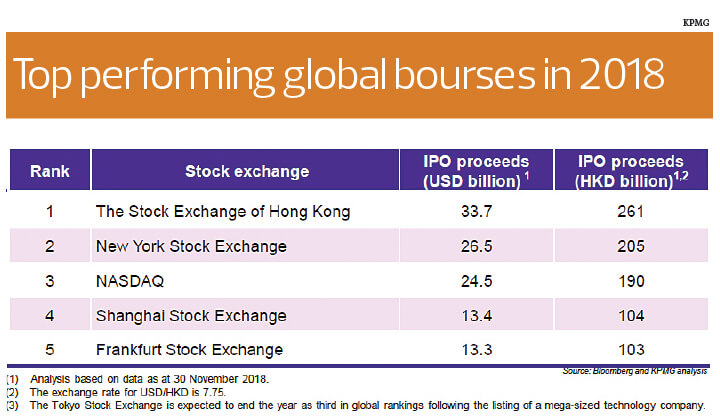 HONG Kong Exchanges and Clearing Ltd (HKEX) is undoubtedly the envy of other stock exchanges around the world, especially Bursa Malaysia, which only saw two new listings on the Main Board in 2018 — the least in its history.

According to Refinitiv data, the Hong Kong stock exchange reclaimed the top spot in the global initial public offering (IPO) market in 2018, coming ahead of the previous year’s winner New York, as listing reforms led to the highest fundraising in eight years.

DCS involve two different classes of shares. One class, which has limited voting rights, is offered to the public. The other, offered to company founders, has more voting power and often provides for majority control of the company. The primary aim of this structure is to enable the founders to retain their influence after a listing.

KPMG also highlights that a strong IPO pipeline and continued interest from “new economy” companies will enable Hong Kong to raise over HK$200 billion from 200 new listings in 2019.

“The strong performance in 2018 is driven mainly by three mega-sized deals from the technology, media and telecom sectors. The influx of ‘new economy’ companies is set to boost the total number of new listings to hit a record 208,” KPMG said in its IPO review report.

Over the years, HKEX’s attraction as a listing venue has increased, given its position as an international listing platform with a large professional investor base offering issuers global branding and business expansion opportunities.

In fact, it appears that there has been increasing interest among Malaysian companies in recent years in getting listed in Hong Kong.

The latest trend of dual-class share structure IPOs in Asia is currently led by Hong Kong and Singapore. In Malaysia however, the regulators do not appear to favour it.