IOI Corp Bhd
(Apr 16, RM4.61)
Maintain hold with a lower target price of RM4.05 from RM4.15 previously: We reduce our earnings forecasts by 5% to 12% for financial year 2015 (FY15) to FY17 to factor in the following: (i) Lower fresh fruit bunch (FFB) production. We reduce our production growth forecast to 3% to 5% year-on-year (y-o-y) for FY15. IOI’s lower FFB production of 2.4 million tonnes for the first nine months of FY15 (-0.6% y-o-y) was mainly due to production being affected by monsoon floods from December last year to February this year. The floods disrupted transport and harvesting at some of its estates in Pahang. As we are expecting moderate recovery in production in the coming months, it is unlikely that IOI’s FFB production growth will meet our projection of 7% to 9% y-o-y for FY15; and (ii) Lower margin for downstream operations. We are lowering our margin forecast for IOI’s downstream operations to 5% from 6% for FY15 to be more prudent. We believe its oleochemical product margins are likely to be affected by lower petrochemical prices. However it is still commanding a decent margin as it focuses more on niche and higher-margin products.

Post demerger of its properties operation, IOI’s asset base declined and its total conventional debt-to-asset ratio came to 49% (based on the 2014 annual report), breaching the requirement of 33% and below under syariah regulations. Therefore, it is likely to be dropped out of the syariah-compliant list by the next review this May. Nevertheless, we believe management would be keen on restructuring its non-syariah debt in FY15 to meet the syariah requirement by the next review. IOI has about RM3.6 billion worth of term loans. If IOI restructures all its term loans to Islamic debt, this would bring down its conventional debt-to-asset ratio to about 25% which would be compliant with the syariah requirement.

We are expecting a weak set of results in the third quarter (3Q) of FY15 mainly due to weak contribution from IOI’s upstream operation, dragged down by weak production growth and crude palm oil (CPO) prices. Its total FFB production for January and February this year was down 13.7% y-o-y. On the other hand, Malaysia’s 1Q15 CPO price was down 14.8% y-o-y (+3.7% month-on-month). For its downstream business, its refining operation is likely to suffer from a thin margin due to low CPO supply. However, we are expecting some foreign exchange gains to come about from the refinancing of its US$500 million (RM1.83 billion) guaranteed notes last month.

IOI’s downstream operation continues to be supported by its oleochemical and speciality fats business. The speciality oils and fats and oleochemicals businesses are expected to continue performing well given IOI’s focus on more niche and higher-margin products. Its speciality fats plant in Xiamen, China, is expected to begin operations next year. The plant will specialise in the production of confectionery products and demand should be well supported by existing clientele in China.

Refiners have been experiencing negative margins due to insufficient CPO supply affected by the low production season and upstream players choosing to export more CPO to take advantage of the zero export duty. With the reimposition of 4.5% export duty on CPO starting in April, refiners are likely to be better off as CPO producers would prefer to sell CPO domestically.

As a majority of IOI transactions are conducted in US dollars, IOI is exposed to currency risks. However, we are expecting marginal impact from the recent depreciation of the ringgit against the US dollar as it has fully hedged all its commitments to minimise the currency risk. Nevertheless, fluctuation in exchange rates would result in unrealised translation gains or losses on foreign currency-denominated borrowings. About 90% of IOI’s loans are denominated in US dollars. According to its annual report, for every 10% increase in the foreign currency rate in borrowings denominated in the associated currency, IOI will see its profit decline by 4.8%.

Maintain “hold” with a lower sum-of-parts-based target price of RM4.05, applying 17.5 times price-earnings ratio (PER) to the plantation division, 12 times PER to the resources-based manufacturing and fair value from its 31% stake in Bumitama Agri at our fair value estimate of S$1.45 (RM3.91). This represents an implied FY16F PER of 15.8 times. The entry price is RM3.85. — UOB KayHian Research, April 16 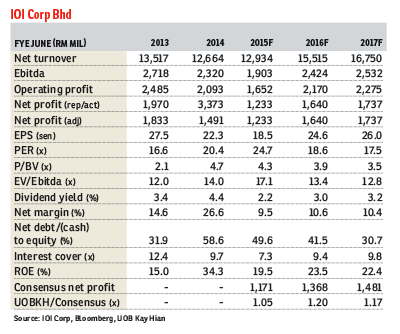